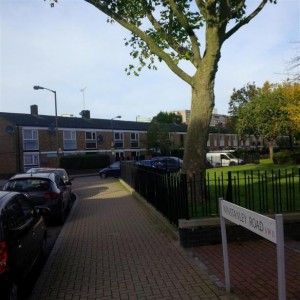 Below is the part of his article about Winstanley estate (Translation: Daniel Zylbersztajn).

South of London’s busiest train inter-junctions, Clapham Junction, lies the huge Winstanley Estate. It too has many social buildings erected in the 1960s and 1970s. For quite a while the local council has intended to profit from the location in the name of regeneration. Eight years ago, they intended to built two 40 storey-high private residential towers next to the station. Local residents up in arms about the proposals, were able to prevent it in a long and protracted campaign, aided by the financial melt-down. But Wandsworth continues to take up the argument of “rotten buildings and anti-social people.”
After years of battle with the local government, Cyril Richert, 43, of the Clapham Junction Action Group, has lost any hope of being heard by the council. “They do not listen to us,” he notes. This forced him and others to seek allies from the outside, in order to indirectly put pressure on the council. Occasionally there are even little victories, like when the investigation of Transport for London and established, that yet another tower Wandsworth had planned, stood exactly where a future exit is to be. Still, Richert accepts, that the total destruction of Winstanley Estate South of the station can not be halted any longer.

Good Life between murder and garden-houses

If one looks closely, there are but three eight storey blocks on the massive estate, that are in a real bad way. Occupants talk of bad windows and pipes, and yet report many outstanding and trustworthy neighbours. Many of the other houses are two storey high, and many even have generous gardens. Violent crime, even murder are not unheard of though, and still not a daily occurrence. The last murder happened three years ago. All this is not as bad as it was over 15 years, when it was, people say, really rough. But security measures such as cameras, security operated doors, and fencing stopped most of that.
All claim, that the community spirit and life is good here. The feeling of it being a bad estate, residents say, is but a feeling by external visitors, who mostly do not know the estate and its people. That sounds very much like what Clasford Sterling said about Broadwater Farm. Accordingly high is the amount of people on Winstanley Estate who bought their own council flat. “Poverty Trap?”, asks a 30-year old lady, when she learns of Cameron’s arguments to knock down 100 of the worst estates, including this one. “I grew up and went to school here, and today I am a medical doctor.” She adds, that it would be wrong to idealise life here, even her brother was mugged here not so long ago, “but it isn’t much worse than elsewhere in London,” she insists.

At the same time the 102 Million Pounds that Cameron wishes to spend to enable renovations on 100 estates are not much money at all, unless one makes deals with property developers.

In parts of Chelsea and Kensington the majority of councils homes these days are private property, courtesy of Margaret Thatcher’s >>Right to Buy << schema. That appears to be the dream of Wandsworth too. Winstanley is not that far from lucrative regions such as Nine Elms or the stretch along the Thames. The station itself is a good selling point. Tony Belton, councillor of the Labour Party for over 40 years and representing Winstanley, believes it is all but a political game. “The amount of social housing units relate directly to how many people will vote Labour or Conservative,” he explains. Cities with less poor and more private properties ensure secure votes for the blue party, so he believes.