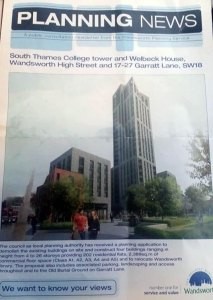 Following our article on the redevelopment of Garatt Lane (South Thames College), including a 26 storey tower, Wandsworth Council has approved the proposal (no surprise, as this is the Council’s own application).

The scheme is described as the demolition of existing buildings and erection of four new buildings ranging in height from 4 to 26 storeys to provide 202 residential units.

You will note that this is in contradiction to the Council’s planning policies. The Site Specific Allocations Document (Feb. 2012) states (page 80):

Tall buildings: In accordance with the Stage 2 Urban Design Study – Tall Buildings, the site is sensitive to tall buildings […] Para 2.8 of the S2UDS refers to both the offices in Garratt Lane and Welbeck House as “less successful” and some reduction of existing storey heights will be sought, in part, on both sites. This is to ensure a better relationship to adjoining listed buildings and to enhance the appearance of the Wandsworth Town Conservation Area

As this is now the rule in the Council, those planning documents have been ignored and the officer’s report says:

“26.4 Block B is fully acknowledged to be a tall addition to the Town Centre but the harm that it would cause is considered to be less than substantial in terms of the tests set by the NPPF and outweighed by public benefits. The tall building elements of the development have assessed against policy DMH4 and on balance satisfy the criteria and therefore considered compliant with policies DMH4 and IS3.

26.6 There are a number of listed buildings located near the site; […] where harm may be caused, the benefits to the public are considered to outweigh those harms.

26.7 The site is located within a conservation area. […] on balance the positive aspects of the development are considered to outweigh other aspects of the scheme and overall the proposed is viewed favourably. “

Indeed, with the Council’s catch words “on balance…” and “where harm may be caused, the benefits to the public are considered to outweigh those harms” everything is now acceptable!