Wandsworth Council’s approval of the planning application, the largest ever in Central London, is a major step towards realising the vision for Battersea Power Station, and follows one of the most comprehensive consultation programmes for a property development ever undertaken in the UK, consisting of over 300 meetings with local groups and stakeholders, 3 public exhibitions and over 16,000 visitors to Battersea Power Station.

Developer Treasury Holdings UK pledged to “protect” the disused 1933 riverside landmark, which will be restored to generate green energy in the future. 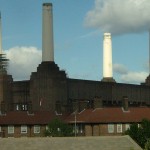 But the chimneys will be demolished and rebuilt, as they are “beyond repair”

The next stage of the process will see the application referred to the Mayor of London and the Secretary of State for Communities and Local Government for their consideration.

The development will also include a new tube station on the proposed extension of the Northern Line from Kennington to Nine Elms and Battersea Power Station. This will be the first ever privately funded extension to the tube network in Central London.