Some 2,000 parents have joined the Neighbourhood School Campaign (NSC), which wants to turn the old Bolingbroke hospital site into a secondary school by 2013. 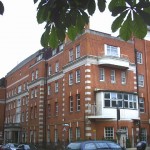 At a stall in the Northcote Road Festival, campaign leader Jon De Maria told us that they have appointed ARK as the school provider. ARK is a private charity with a good track record in setting up Academy schools. He also announced that Wandsworth Council is now in talks with the NHS to acquire the Bolingbroke Hospital site. Bolingbroke Hospital closed in 2008 despite an extensive local campaign to save it. Since then it has remained empty.

According to the NSC campaign, the closest secondary, Chestnut Grove, received 777 applications for 150 places. The next closest, Salesian College, has a faith orientated admissions policy, and will close for a year soon anyway. The end result is that children in local primary schools (Belleville and Honeywell are the two largest primary schools in Wandsworth) have to travel far and wide when they move up to secondary school – Over the past four years,  pupils have ended up at 49 different schools.