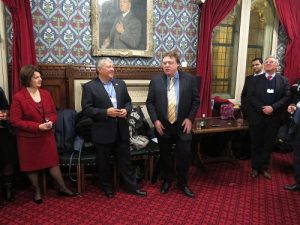 Wandsworth Chamber of Commerce held a highly popular event at the Jubilee Room of the Houses of Parliament last Thursday. As Battersea, Balham and Wandsworth MP Jane Ellison is President, members of the Chamber and guests were treated to an evening of networking, food and drink in pleasant surroundings.

Steve Pinto, the Chamber’s CEO caused some hilarity when he said that as there were several Chairmen present – he’d invited some Chairs of other Chambers of Commerce – so he had to address several people as Chairman.

Around 80 people attended, from many different businesses, organisations, and charities, including Chamber regulars, and people who were new or haven’t been to the friendly events before. The food was particularly good, supplied by Christopher Events caterers.

Jane Ellison, who is now a Minister at the Treasury, said, “I am here to hear from you directly about what you need from local and national government to support businesses.”

Steve Pinto says, “We are extremely grateful for the terrific support from all of our local MPs. Patron Memberships have been going well and Access Self Storage and LeBureau are upgrading to Patron Memberships.” Steve mentioned how the Chamber had introduced developers to the concept of co-working space, as exemplified by LeBureau.

Steve also talked about Lioness, the Wandsworth business loyalty card which is being planned at the moment, which also will raise money for local community work, and BBX – another method which allows businesses to trade off spare capacity.

The Engineering Business Growth programme will have mentoring and support for new and growing business ventures.

Sarah Banham, vice president of the Chamber and Director of Communications, Battersea Power Station Development Company told the audience, Phase One’s first resident moved in last Thursday. 866 Flats are available so people will move in gradually, plus the retail sites will open in the summer, then the Phase One parks will open later on. Lots of local companies are getting the operational side getting the development ready. “We want to support local businesses.” She talked a lot about Tunnel Boring Machines – all have to have names. There are five now tunnelling under that part of London.

Jobs and skills have been good for the local area, with a service excellence programme run by the Development. They also have a charity arm called the Battersea Power Station Foundation, which gives small grants to grassroots organisations. It is not just residential, but commercial, retail and leisure spaces.

Creative Events are launching a Wandsworth Business Digital Magazine to help local businesses to flourish – initially there will be three issues per year.

how much personal benefit his long membership of the Chamber had given him. He seconded Steve Pinto’s appreciation of Wandsworth Council’s Economic Development Office (EDO) which has been consistent in its support of the Chamber and local businesses.