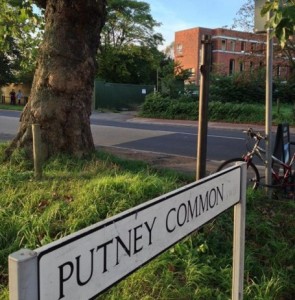 A view of Putney Common with the hospital in the background.
September 2013.

“The appeal is to convert residents’ support into a substantial fund to save part of Putney Common from being lost. We believe there is every chance of reversing the recent decision by Mr Justice Wyn Williams in the High Court and the argument will now proceed to the Court of Appeal. The Commons Conservators are the Trustees of the Common and should have upheld the 1871 Wimbledon and Putney Commons Act. They have utterly failed to protect our Common from Wandsworth Council’s unnecessary, unwelcome and ill-founded land grab of common.

Wandsworth Council has been given wide powers by the Commons Conservators to encroach on common land, to build a private tarmacked road, complete with remote barriers, bollards and street lighting. The Conservators should have defended the Common; instead of doing so they decided to sell out for £350,000. They signed agreements in secret, with no consultation with their stakeholders. Part of the common is being lost and for a derisory sum.

The financial support of the community will enable us to do our utmost to protect Putney Common, something the Commons Conservators have failed to do. If we do not continue to fight through the courts, it will result in Putney Lower Common becoming completely urbanised by Wandsworth Council, which will be a disaster. The common land near the old Putney Hospital will be lost, literally forever.”

Steps have been taken by FofPC’s solicitors Richard Buxton Environmental and Planning Law to begin the Court of Appeal process. Until now FofPC have funded their own expenses, aided by unsolicited donations. By opening up the funding through the community crowdfunding appeal it allows all local residents, as well as others who care about protecting their commons, to make a financial contribution.

Community crowdfunding is an innovative form of funding, targeting residents to give to local causes they support. The FofPC target of £15,000 must be reached within a 30 day period of the appeal being launched and only if the target is achieved is the money released. The funding will be held by Richard Buxton, as solicitors to the FofPC.

The FofPC appeal is one of the first community projects to be launched by world’s leading charity website JustGiving.com.

The appeal link is: http://www.justgiving.com/local/project/friendsofputneycommon

Wandsworth Council propose to build luxury flats and a new 420 pupil primary school on a site that is fundamentally too small, requiring encroachment on common land. The derelict Putney Hospital owned by Wandsworth Council is less than 0.5 hectare. The additional 0.8 hectare of the 1.3 hectare site is exclusively common, owned by the Wimbledon and Putney Commons Conservators. The entire access road is to be built on common land.

Some 1,300 Putney residents objected to the plans during the planning process, but were regrettably completely ignored by Wandsworth Council’s planning committee, the public consultation counting for nothing.

Council Leader Ravi Govindia’s statement that the development would only proceed if supported by Thamesfield residents is now exposed as the hollow promise it has always been.

The ‘crowd funding’ appeal launched by FofPC has just broken the £11,000 mark. The Open Spaces Society (Britain’s leading pressure group for common land) who were involved in the creation of Putney Common back in the 1870′s has offered unequivocal support and donated £350. See their press release HERE.

We support Friends of Putney Common in their campaign to save common from road-building @FofPC http://t.co/hbMqapy00p