The annual Aspire2inspire Dyslexia (A2i) evening is always worth waiting for. Wandsworth saw a remarkable line-up of inspirational dyslexic people who showed how being bullied or called “stupid” in school was not going to stop them achieving their ambitions. Elizabeth Kwarteng-Amaning, the founder and CEO of the non-profit organisation, said “Welcome to our third year of inspirational dyslexic speakers who will share their stories, and how their struggles resulted in inspiration. Some of these speakers changed my life completely.”

Downstairs at Caius House in SW11 there was an exhibition of organisations and equipment vendors who help dyslexics and people with other challenges. The team behind Irlen glasses – which assist people who have reading problems due to imperfect colour vision, and the C-pen which scans and reads information, were there.

Tonisha Tagoe, a dyslexic lecturer, introduced the event, with the first speaker being Margaret Rooke, an author who is not dyslexic but has written several acclaimed books about dyslexia and has a dyslexic daughter: Creative, Successful, Dyslexic, interviewed various successful dyslexics; and the wryly-named Dyslexia is My Superpower (Most of the Time) takes a positive view of dyslexia in children and adults. Margaret advises “Focus on your strengths.”

The next speaker was Jasmine “Jazzy” Hearts, a 13 year old dyslexic, bullied at school, who has become a speaker and ambassador for dyslexia. Many people in the audience identified with her struggles as schools can be very cruel places to anyone who seems a bit “different”. She uses her gift for speaking to help other people now. Councillor Ian Lewer, the Deputy Mayor of Wandsworth Council, who came out publicly as dyslexic at last year’s event, said he was lucky enough to be diagnosed early and got special schooling, and extra time in exams which enabled him to start on a successful career.

After a food break the second session started with a non-dyslexic, Jannette Morgan, who supports people with dyslexia, who amazed the attendees by giving her speech in poetry. It was hard for anyone to follow that. Pennie Aston, the Founder of GroOops dyslexia charity and Gaby Holford a nutritionist and healer gave presentations on different aspects of having a positive lifestyle.

Gershom J. Allen is a very forceful speaker who says “It is all about accepting who you are, before you can become” (that is, who you want to be). His journey took him from being beaten at school in Montserrat for not being able to read, to working his way up in a factory from sweeping the floor to supervisor. “Every person with dyslexia has a gift. There are special people that are meant to do great things.” He became a coach, and a motivational speaker, like his heroes such as Tony Robbins.

Many of the speakers were quite candid about their struggles and the psychological pain of undiagnosed dyslexia, although it does seem that schools are getting better at spotting this early on and getting help to those who need it. 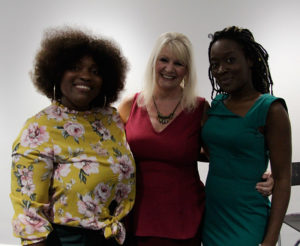 Overall it showed that many dyslexics find a different path in life – using their artistic, verbal, intuitive or empathic skills to benefit themselves and wider society, and that dyslexia can be a “gift” rather than a handicap.

Julian Jackson is Wandsworth Chamber’s blogger, whose interests encompass technology, cryptocurrencies and blockchain, the environment, as well as photography and film. His portfolio is here: