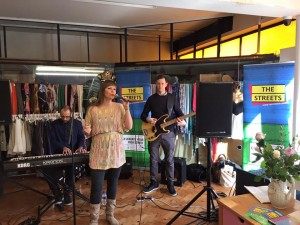 Wandsworth Oasis is one of the borough’s foremost charities, running seven charity shops. It raises funds for people living with HIV.

CEO Gill Perkins says, “We like to be quirky and fun. Not just run charity shops. That’s why we started doing events and music performances at our stores.”

Last year they opened their largest shop at Amen Corner, which is over 4000 square feet. This gave them a space large enough to hold more ambitious events. They have had live jazz, a recycled/upcycled fashion show, and converted the shop into a souk for a Lebanese Evening with local chef Dan Lepard for a World AIDS Day fundraiser. They are also making their whole organisation more green, and have partnered with Transition Town Tooting to recycle as much as possible so that they can reduce their footprint and the amount of stock that goes to landfill. 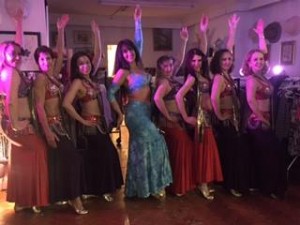 The charity has been operating for 26 years, but it was failing five years ago when Gill Perkins came in and turned it around with her partner Gill Rogers and a great team of volunteers. Last year it had a turnover of £487,000. Gill predicts it will reach £600K in 2016. The charity operates as a funding body – channelling money it gets from its shops to support other projects in the HIV health sector. One of the factors in their success Gill attributes to collecting donations, not just passively waiting for people to bring them in. 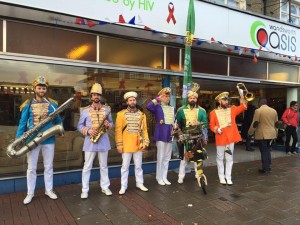 Sometimes strange items turn up as donations. They had some “wetsuits” on sale, which turned out to be rubber fetish clothing. The weirdest item was a sit-down massage saddle – Gill labelled it a “fitness item” and put a price of £20 on it. One customer tried it out, then a second woman sidled up to a puzzled Gill and said, “You do know what that is, don’t you? It’s a sex toy.” Unsure what to do, Gill hid it in the storeroom. Sometime later the second woman came back, and slightly furtively, bought it. Gill says, “I think she got a bargain. It was probably worth a lot more than £20.”

Oasis are planning to host more events in 2016. “It makes us more visible to the public, and draws in people who may not have known about us, who then become customers and donate items, so this is working out well for us.”

Gill adds, “We are a big supporter of Wandsworth Chamber of Commerce. We try to source from local suppliers wherever possible, to be part of the borough community.”