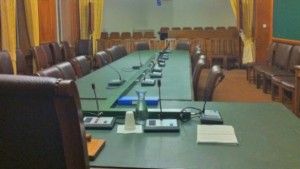 I think it is now more or less established that there will be 2 planning forums per year, as the previous one happened on the 10th June 2015 (I forgot to report about it but you can download the minutes HERE).

Therefore, a new planning forum was held on 18th November 2015. 11 individuals from community groups and societies attended the meeting, along with 4 officers and the chair of the Planning Application Committee, Cllr McDermott.

We started the meeting by reviewing last meeting’s minutes. And that was in itself already highlighting failure: Point 1, 6th sentence of last meeting’s (10th June 2015) said: “It was requested that the minutes be circulated sooner and confirmed that they will be briefer“. As a consequence they were sent… 5 months later, 1 week before this meeting, and were 10 page long! As you can see, a lot of consideration on previous discussions…

In addition (an important point in consideration for the meaning of the policies) CJAG asked that senior officer Martin Howell’s comment at the last meeting was specifically noted as: “Tall buildings will be assessed against the 15 criteria of policy DMS4” (page 8, item 11) in response to the meaning of appropriate/sensitive location for tall buildings. Martin Howell accepted the change.

1- Update on Local Plan and SPDs

A lot has been said already HERE and THERE on the local plan examination. Senior planning officer Martin Howell said that he was expecting the final report from the government inspector to be received before Christmas and commented that only minor modifications were requested.

CJAG pointed out that, as a so called “minor modification”, the inspector said:

Martin Howell commented that it was only the personal opinion of a specific inspector, and that none of the others say the same.

If none of the previous inspectors made the same comment, maybe it became so obvious nowadays with numerous examples of just ignoring the full 250 pages of the Site Specific Allocation Document (SSAD) in the recent years, that it couldn’t be ignored anymore?

In addition, Martin Howell wrongly commented on the fact that at the time the Core Strategy (one of the main planning documents), was created, the SSAD did not exist. Previous reviews in 2010 (click) and 2011 (click) DID in fact contain the SSAD (click to view SSAD documents in 2009: SSAD1 & SSAD2). You can also read a February 2010 article (click) about the Clapham Junction case in the SSAD.

Other comments from community groups said that the Council can wash out the planning policies, nobody goes to appeal due to cost: with an expected cost in excess of £10k (+additional penalties if the case is lost) at least, no community group can afford any judicial review. Therefore this is only an option reserved for developers and a clear contempt for democracy to say that anyone can appeal against a planning decision, as the Leader of Wandsworth Council, Cllr Ravindia, said last April (click).

If not further modification is needed, Wandsworth Council expect the local plan to be approved with the full Council in March 2016.

At the same time, the planning department is already making amendments on local development schemes regarding Strategic Industrial Land (SIL) needed (in relation to the adoption of the Mayor’s Land for Industry and Transport SPG). It will be making the first part of the next review of the local plan starting… next year! It is expected to be adopted in October 2019.

A further review is undertaken on Housing SPD, which should be consulted in Spring 2016.

A number of changes were implemented following the consultation, the main modification being related to reinforcing the case for more community and public services, as well as transport facilities.

It should be effective from September 2016. Currently Head of departments and deputies have been appointed.

Following the recent decision by the government to extend the current development rights (to convert offices to residential without planning application for example) to indefinite time (never expire), Wandsworth Council is eventually considering to implement an Article 4 direction to give some limitation.

Such request must be limited and specific as the government said any such request will need to be backed up by very strong evidence. Example of Islingteon borough was given, where a full borough limitation was refused, and eventually only a pepper pot of individual locations was impleted, although it is now very effective in that borough.

An article 4 direction will be also considered to:

Crossrail 2 is consulting (until January 2016) on the option of rerouting the line to Balham instead of Tooting. Wandsworth Council is seeking expert advice and if appropriate will challenge such decision.

Premilary works on Thames Super Sewer tunnel is happening. The good news is that apprently the cost added to each yearly Thames water bill should be reduced from £80 to £20, maybe even 0.

New consultation on Wandsworth Town One way system changes is happening at the following dates:

Planning application for 56-70 Putney High Street refused by the Council and approved by the mayor of London, it was said by community groups that it was the death of localism (if not already dead). The chair said that the Council is currently looking at options for judicial review… but it is unlikely to go further.

Affordable Housing should be an item on next agenda, probably in June 2016.

Noticeably it was necessary to remind the chair several time that, although she wanted to press with updates on the agenda, it was primarily a forum where individuals should be able to discuss and participate, not listen to a lecture.