Julian Jackson, a journalist based in South London, has just launched a paperback called “The Thatcher Years Reenactment Society and Other Fictions”, consisting of 12 darkly humorous stories about strange characters like part-time Viking Asgrim, or April, an impoverished actress forced to do promotions in a clown suit when she prefers Shakespeare. Many of the stories are set in South London and feature landmarks like Brixton Town Hall. 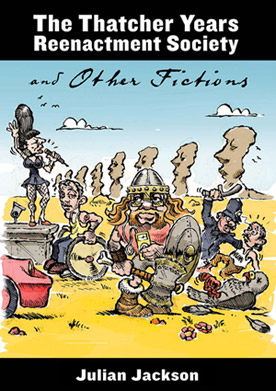 Julian says, “I wrote these stories over a period of years, just really when something came to me, like Lost Voice, where a male model falls in love with tragic singer Echo. They are about oddballs, and people on the fringes of society, but I didn’t make all of it up. Some of these things happened to me or people I knew over the years, of course I have fictionalised the events, but they have an element of truth.”

Many unusual but vivid characters populate the stories: fat Arnold, who enters an eating contest, but finds his main rival is a diminutive student Krysia – nicknamed Jaws – who needs the money – will romance bloom in these unlikely circumstances? How will callous Professor Augustine Mach justify psychopathy? Will gorgeous but vulnerable pop star Echo fall for a vain male model and what will happen if he rejects her?

Who are the Thatcher Years Reenactment Society?

Julian says, “My regular journalism is about the environment, business and technology, subjects which don’t lend themselves to many laughs, so these stories are an outlet for my black humour and strange flights of imagination. I have nearly finished a novel which is in the same comic space and I hope to release it next year.”

The book is self-published. “I decided to self-publish because collections of short stories are very hard to place with conventional publishers. It was just easier, although I had to put a lot of work into proofreading and design. The cover is from a brilliant artist called Joseph Goode, who really captured the essence of the stories,” Julian adds.