The government inspector in charge of reviewing Wandsworth planning policy gave a big blow to the Council saying that their Site Specific Allocation Document (SSAD), the main policy document describing major sites, is not worth the paper it is written on! 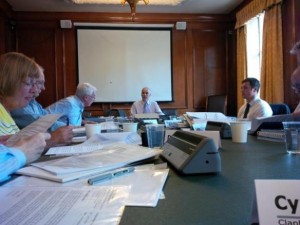 On his interim views on the modifications needed to make the Wandsworth Local Plan Review documents sound, published at the end of July [download], the inspector wrote:

“The introduction of the SSAD sets out its purpose but there are no policies to confirm that development should be undertaken in accordance with the site allocations. Neither is there anything to the effect that planning permission will be granted for proposals that follow the relevant design principles and that have regard to the other criteria.
Without a policy to expressly state that site allocations will be approached in this way the documents as a whole are ineffective.”

This is what we have been saying all along, as we wrote to the inspector saying that the Council’s planning documents are “not effective and need to be reinforced“. The other Community groups have also said all along the same thing, the Wandsworth Society saying: “it is completely ineffectual in judging either the harm or the benefits of tall buildings. A coach and horses can be driven through the various policy guidelines.”

The inspector suggested that “the Council should consider inserting such a policy into the Core Strategy“.

Upper targets on affordable housing must be removed said inspector

The inspector also commented on affordable housing,saying that “the setting of expected maximums for the percentage of affordable units […] runs ‘against the grain’ of what the Council is trying to achieve“.

This is, once again, what CJAG pointed out, telling the inspector that either the Council should stick to the percentage set out in the policy, or dismissed it as in any case the Council is not enforcing the figures.

Although the planning officers tried to justify the targets, saying either that their omission was going to increase the land value and prevent developments, or that enforcing targets was likely to prevent developments (rather contradictory actually), the inspector said:

“Setting an arbitrary figure would confuse rather than provide clarity. Therefore on the basis of the evidence before me the reference to expected maximums is not justified and should be removed.”

We would have like the reference to be made to the entire targets (minimum AND maximum) but this is a step in the right direction.

Although the inspector considers the focal point designation as justified, he said:

“SPDs should not be used for the allocation of sites for a particular type of development. Consequently if the Council wishes these sites to be allocated then this should be pursued through the SSAD as proposed main modifications with accompanying sustainability appraisal and possible Habitats Regulations Assessment.”

In other words, if the Council wishes to change the considerations for some sites (lifting the rules on tall buildings for example), it should be made in the main Site policy document (SSAD), not in thefocal point designation.

The inspector has backed Northcote ward’s councillors letter to extend some protection to retail shops in a further two blocks of Northcote Road from no 64 to 92. He said:

“I saw that Northcote Road is a lively and vibrant area and including both rows within the secondary frontage would accord with the Council’s objectives of maintaining the vitality and viability of its shopping areas.”

The Council is consulting on some modifications

Main modifications are proposed in order to make the Council’s Local Plan documents ‘sound’ and are published for a six week public consultation period between Friday 18 September and Friday 30 October 2015.  All the representations received on the main modifications received during this period will be forwarded to the Inspector for his consideration.

In reaction to the Inspector criticism regarding the (in)effectiveness of the SSAD, the planning officers are including a new policy within the Core Strategy document, called SSAD1:

“4.11 The SSAD sets out the main sites where development or other change is anticipated in the borough, where the Council has particular objectives or is supporting or promoting specific proposals. It shows development sites which will contribute to achieving the objectives of the Core Strategy. The SSAD is intended to highlight specific opportunities, objectives and requirements on particular sites. Development will also be expected to comply with other relevant policies and development standards to deliver high quality and sustainable development.
Policy SSAD 1
For sites identified in the SSAD, planning permission will be granted where the proposed development is in accordance with the principles and the detailed criteria set out for the site in the SSAD, and with the relevant area spatial strategy.
Proposals which do not comply with the SSAD will only be granted permission where material considerations clearly indicate that an alternative type of development is more appropriate, where the development would be in accordance with all other relevant policies, and where the development would not prejudice the delivery of the Core Strategy, the objectives of the relevant area spatial strategy, or SSAD compliant schemes on neighbouring sites.
Where further or updated information and guidance is given in a Supplementary Planning Document for a site identified in the SSAD, this will be a material consideration in determining applications.”

In our view, this proposed changed is only creating confusion as there is no definition of “material considerations [which] clearly indicate that an alternative type of development is more appropriate“. The Council is only inviting developers to ignore the SSAD policy and come with alternative plans!

During the hearing, the inspector suggested that the word “significant” should replace “severe” to qualify cumulative development impact on transport.

The council is suggesting to amend the policy with:

“Development, including changes of use, will be permitted where: the residual cumulative impact on the transport system (including public transport capacity and the highway network) is not severe.
i. the opportunities for sustainable transport modes have been taken up depending on the nature and location of the site, to reduce the
need for major transport infrastructure;
ii. safe and suitable access to the site can be achieved for all people;
and
iii. improvements can be undertaken within the transport network that cost effectively limit the significant impacts of the development.
Development will normally only be prevented or refused on transport grounds where the residual cumulative impacts of development are severe.”

It seems that the planning officers completely missed the point of the inspector, as they still use the word “sever”, even reinforced as they repeat it twice, in nearly the same wordings!

And last but not least, the Council has now clarified its definition of the focal point designation for Lombard/York Road area, as they are removing the part saying that tall buildings in this area are inappropriate, to replace it with: “the site is sensitive to tall buildings” (which we know means they are welcome!)