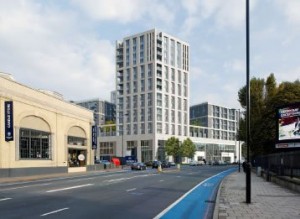 While there is still an appeal on the previously refused 17 storey podium on 98 York Road, developers have also submitted a new screening application (nearly identical) for the site (see our article HERE).

Nobody will be surprised to read the response from Wandsworth Planning department (10 August 2015) giving a thumb up for the proposal (page 4):

“the scale of the impact of the proposal is not considered to give rise to markedly different impacts when taking into consideration the urban nature of the location with substantial buildings of similar height neighbouring the site, some comprising residential and similar commercial uses.”

And of course, despite denial from the Council that a tall building does not set a precedent (each of them assessed against their own merit – p8 of the paper –  and bla bla bla….), we see again here that the first tall building justifies the next.

In comparison to the recently approved planning application for a podium with towers up to 21 storeys to be erected next door (198 York Road), this only 17 storey tower would almost appear as not ambitious enough!

Can you talk more non-sense than that? In English it means: “we have already approved many towers of similar scale in the area, so one more or one less won’t change anything“. The level of distortion and spin (or whatever you want to call it) in the officers’ report is becoming alarming!

And of course, it’s another sign that the SPD consultation for York Road was no more that a presentation exercise for the Council, which is now considering already the area as an open land for tall buildings (or landmarks as the planners like to call them).