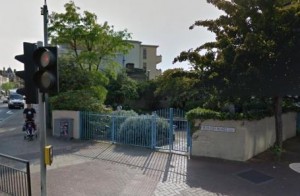 Application 2013/5712 (70-74 St John’s Hill) was granted in April 2015 for erection of four-storey plus basement building to provide Class A1 shops at ground floor with 8 flats above including a first floor roof garden.

It should replace an openspace/pocket park and match in shape the three other existing buildings at the crossing of St john’s Hill and Plough Road.

Hopefully we should see some progress made towards the second part of 2015.