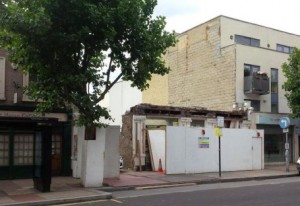 “The Victorian pub, near Clapham Junction station, was open for more than 100 years before it closed in 2013 and fell derelict. It was pulled down in May by a developer hoping to extend it and build a block of flats.

It is the second case this year of a historic London pub being reduced to rubble apparently without full planning permission, after the destruction of the Carlton Tavern in Maida Vale in April. […]

The three-storey building was originally known as the Fishmonger’s Arms before being renamed the Alchemist and briefly the Stencil Bar.” 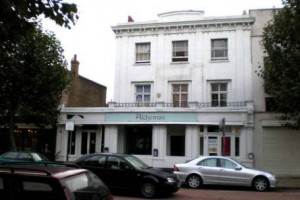 Developer Udhyam Amim claimed that the building was unsafe and that although they did not have consent to demolish the façade, the frontage crumbled while they were demolishing the rear.

“The building was to be partly demolished in accordance with Planning approval 2009/2994. During this phase of the works the structure was found to be of such poor quality and structurally unsafe that the only option was to demolish it immediately. However the proposed development will reinstate the front façade as closely as possible to the original albeit that the façade will be extended the full width of the site. Detailed measurements have been recorded and important original elements have been safely stored so that the original building details can be replicated.”

However we found several flows within the planning application. First of all, in the current retrospective, they are only talking about the demolition of the top part of the façade. You can clearly see on the photo at the top of this article that a major part has been also demolished on the left hand side. Although it was probably necessary to conduct the necessary construction work, this should be mentioned in the document. 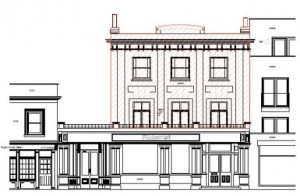 In addition, the original planning consent granted permission on 11 January 2010 and valid for 3 years. The demolition took place in June 2015, clearly out of the 3 years period which would have expired in January 2013.

Although planning officers confirmed recently that the 2009 planning application was in fact valid as they notified of the start of works in 2013 (and nothing happened before 2015!) but never applied for consent to demolish. In our view, a full new planning permission should therefore have been requested to start any construction work on the site.

“We are treating this as a very serious breach of planning rules, which we believe can only be put right by the complete rebuilding and reconstruction of this important community asset, using the same materials and to the same architectural design.

This building is an integral part of the St John’s Hill Grove conservation area and its loss will be keenly felt by local people. That’s why we are determined to take action to ensure it’s restored for future generations.”

We would strongly support any action which the Council sees fit to pursue in enforcing the reinstatement of the building in a satisfactory way. In addition it should be noted that – as the 2010 planning permission as expired – the developers do not have any permission for redevelopment in this site at the moment.

You will notice that the National Planning Policy Framework (2012) says:

“130. Where there is evidence of deliberate neglect of or damage to a heritage asset the deteriorated state of the heritage asset should not be taken into account in any decision.”

A new planning consent should be submitted and if needs be the original building should be rebuilt.