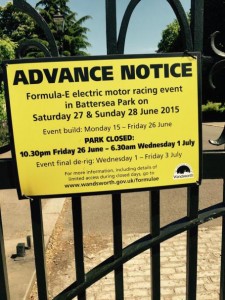 Back in early summer 2013 the Council was in correspondence with City Hall about a proposal for Formula E racing in Battersea Park.  One should add that, according to news items, the venues under consideration had included Wembley; Battersea Park was not even on the agenda

Why, then, did they suddenly decide that a small beautiful Victorian Park was a better bet? Possibly because of Battersea’s connection with ex-Council Leader Sir Edward Lister, Deputy to Boris Johnson.

Edward Lister put the proposal to Wandworth on May 1st 2013, and introduced Alejandro Agag, CEO of Formula E. Lister’s email makes it plain that he was seeking a decision within the month. The Council was at first against the idea; as Cllr. Ravi Govindia put it in his email of 5 July 2013:

“There was, however, a decisive weight of opinion among my colleagues that in light of the length and scale of disruption in the park, there was distinct potential to undermine the current fine balance between the income-earning events that are staged in the park and its use as a peaceful ‘oasis of calm’ in the city.”… I fear that local negative impact would outweigh wider approval and acceptance”.

But they soon changed their minds. Could it have had anything to do with this letter from Mr. Agag:

…. “would be for us to  consider to increase (sic) significantly the fee we could offer the Council for the use of the Park, by this allowing the reduction of other revenue-generating events.”

Anyone looking at the latest events list for which Planning Permission has been requested will see that it not only includes Formula E 2016 and 2017, but also the Motor Show. No reduction that we can see.

Following discussions FBP, Battersea Society and others had much to say about it. Heritage Lottery Fund also had to be consulted.

As Cllr. Jonathan Cook wrote in his email of 31st July:

“Fair to say HLF didn’t seem overjoyed at the proposal.”

Lister made announcement before formal decision

As early as 30th June 2014, before supposedly any decision had been made a news item said:

“Battersea Park has been revealed as the preferred venue for the Formula E London ePrix which hosts the season finale on June 27 2015. The Deputy Mayor of London Sir Edward Lister made the announcement together with Alejandro Agag….”

There was a public meeting in November 2014.  But the Council only told FBP, Battersea Society and some residents’ associations about it.  The remaining thousands of residents knew nothing. In December a Planning Letter was sent to those living on the periphery of the Park. We have yet to find someone who actually had that letter. The Chair of one Mansion Block certainly did not, either personally or in her official capacity.

The very detailed Heritage Impact Report had a few things to say. You may read the whole thing on the link HERE, first item, posted 28th May 2015, but for the moment here is one small extract:

“Experience of other events large-scale in Battersea and other Major London Parks shows wear and tear can be significant and require up to one year to recover…. But if event held annually for five years will be difficult to achieve reinstatement”.

Yet in spite of comments such as this, Jon-Paul Graham, Major Events and Partnership Manager in the Mayor’s Office, wrote:

“Reading the HIA report I am comfortable that the event does not permanently compromise the park.”

“….”which (HIA Report) I don’t see as too bad. In which case the EH (English Heritage) response to it is disappointing”

Any monies received will not all go to Battersea Park, as it will be used for the other 31 green spaces, as well as for other things – we were told it would help pay off Council debts. The planning application was granted in mid-February 2015.

Damage has already been done to the park to change it permanently to form a race track.

[As shown on the images below, the Council has widened carriageways, added extra tarmac, removed mature trees, removed hedges, branches which can spread over the road are being shredded…

Battersea MP (and Health Minister) Jane Ellison has said that as long as no damage is done, she is in support, and refused to intervene so far. – note from CJAG] 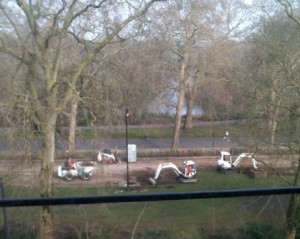 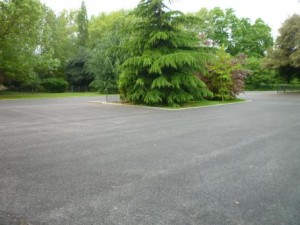 More tarmac is being laid 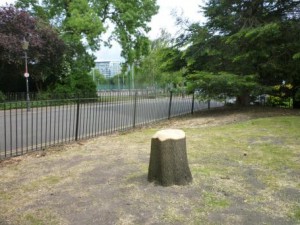 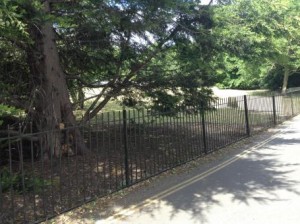 Branches over the track shredded

The story does not stop there, however.  Recently The Battersea Park Formula E Action Group was formed by like-minded individuals who strongly opposed the use of a listed park environment for car racing. After some detailed investigation the Action Group has made some very interesting but worrying discoveries on how the consultation and planning process has been handled. In order to gain support for the removal of this event from the Park calendar by effecting the one year break clause the Group has set up an on-line Petition.

John Fox, a member of the Battersea Park Formula E Action Group has produced a time line of the whole sorry business, together with links to various material. Download the time line HERE.