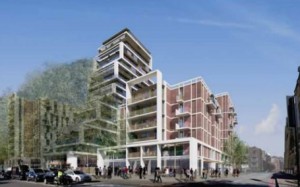 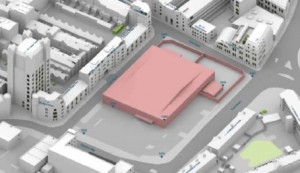 Current 3D view of the site. 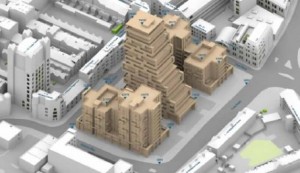 Proposed 3D view of the site.

Knowing as Wandsworth Council is considering its planning policies, what would you do as a developer? Submit some buildings of 9 storeys as advised in the documents? You foolish… go for 20 at least!

As usual with Wandsworth Council now, it is in plain contradiction to its planning documents. Such proposal would be laughable if we did not know that the Council has got a record of throwing out its own rules to praise the developers’ plans. The Site Specific Allocation Document (which has just been submitted only months ago and is under review by the planning inspectorate) is stating (page 234):

The usually very cautious panel set up by the Council raised several concerns:

Strong objections from the local residents

There are currently 32 objections from local residents and amenity society (and no support).

The Clapham Junction Action Group is objecting to the proposal in respect to the following points:

Wandsworth own planning documents states (SSAD) that the site is inappropriate for buildings more than 9 storeys high. All of the surrounding buildings are 5 storeys or less.

The obvious justification for the height and massing proposed for this location (and we hardly believe that the Design Panel failed to perceive the odds, as this is the usual justification for any breach of policy) is the viability of the scheme in respect to the value of the land. However this wouldn’t be the case if Wandsworth Council was not used to ignore its own rules and permit all sort of developments, whatever incongruous to the area they might be.

Daylight, Sunlight & Overshadowing: loss of up to 86 for 54% of the neighbourhood%

In summary, the report states: “the effect of the construction of the proposed scheme upon 84% (NSL) of the surrounding residential rooms is considered to be negligible in nature on the basis that the daylight amenity alterations“.

Despite those figures the reports maintain that the changes are negligible!

Affordable housing guidelines as usual ignored for the sake of viability

On individual sites a proportion of at least 33% of homes should be affordable, however, higher provision will be sought where viable.

Indeed, in relation to affordable housing, the NPPG (National Planning Policy Guidance – March 2014) makes clear that “where viability of a development is in question, local planning authorities should look to be flexible in
applying policy requirements wherever possible“. And this is of course the usual lines used in the financial viability statements nowadays, with the advisors saying:

“The development proposals are therefore considered to go beyond the requirements of the NPPF and Policy IS5 by providing an element of affordable housing on the site, which would not otherwise be provided taking into account the Viability Assessment which identifies that the development generates a deficit against the viability benchmark.”

As the possibility to dish the affordable/social conditions as well as the height limitation are all factors increasing the site value, there is no surprise that it creates that viability issue.

However, even with that consideration, the BNP Paribas advisors wrote that “the proposed Development is unviable with 100% private housing on the basis of current costs and values“. Therefore it questions either the accuracy of the advisors report, or the calculation of the developers (especially with the Design Review panel views to seek the highest quality of material).

As highlighted by the Design Panel we regret the removal of the mature trees along Gartons Way.

Over 261 units, there is only provision for 104 parking spaces. As usual, the new scheme fails to recognise the car parking requirements for the area (in particular the over night demand caused by the residents at the Travel Lodge and during the week).

In addition it must be noted that York Road is heavily used during the day and often congested at pick hours. This over-development will only exacerbate the existing situation.

The proposed scheme represents significant over development of the site and should be refused. We can only reiterate our previous statements:

“We consider that the wording of the policies is an open door to all understanding and misuse by the Council to justify any planning development. We have already numerous examples where factual breach of policies is balanced with subjective “overall benefit” in Wandsworth planning reports. Those statements have no place in the document and must be removed for the policy to become effective.”

As a resident wrote: “It is time that the Council adopted a sensible and logical
strategy to developments in Wandsworth.“. We join the call from the Battersea Society asking for:

“a halt to any further planning permissions until there has been serious consideration, with TfL, of the implications of the increased demand on road and public transport in the area.  Any study should include achievable plans for meeting the demand for those schemes already consented and realistic proposals for meeting additional demand.”

Decision is to be made by Wandsworth Council committee on May 21st.