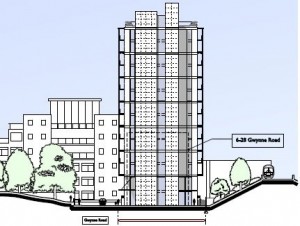 Another planning application came out last month (2014/5357) to build a 14 storey tower at 56 – 66 Gwynne Road SW11 3UW, just behind the development site that we were talking about two weeks ago.

The description is: Comprehensive redevelopment involving the demolition of an existing two-storey commercial building, excavation to form new basement and replacement with a new 14 storey building to provide mixed use comprising of commercial/retail at ground & mezzanine levels and 33 residential flats above with cycle and refuse storage facilities at basement level.

There are currently already 7 objections, which should guarantee that the scheme will go before the Planning Application Committee (under the new rule, less than 3 objections won’t go before the PAC, in addition to the current “no-representation from the residents” rule).

In September 2008, in the same road, a nine storey building (with 130 flats) was proposed (2008/3406). Planning permission was refused for the following reason:

The location of the building, in the current environment (however likely to change if the Council grants permission for a 28 storey building in Lombard road, blocking the view to the river) will obscure light and views from the newly build adjacent dwellings (some of them with roof terraces). It will also be dominant to the public park opposite. 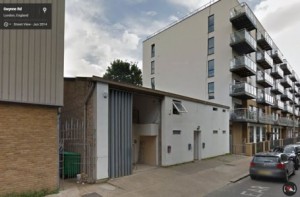 In addition, the current proposal for a 14 storey tower is contrary to Wandsworth planning documents. The Site Specific Allocation Document (part of Wandsworth Borough Local Plan, reflecting the borough statutory policies and guidelines for planning development) has got a section dedicated to a site nearby, at 12-14 Lombard Road, SW11 (p174). It says:

However the Council told us that they now want to designate the area as a “focal point”, which means that they could accept taller buildings (and we were told that they even encourage developers to go for “iconic” towers).

We have already shared similar concerns about Wandsworth becoming a dormitory borough and the Council taking absolutely no action to contradict this trend. The lack of measure to oppose government legislation allowing change from offices to residential without any planning permission is an example, in addition to past granted permissions to allow major loss of office space, such as 77-83 Upper Richmond road development (P.A. 2011/0054), or the more recent report from the BBC showing that Wandsworth Council allowed a developer to drop all office space from development.

Additional concerns from local residents are – as usual with all new developments – reside within the increased congestion and the lack of adequate parking provision for the scheme.

You have until 21st November to comment on the application.