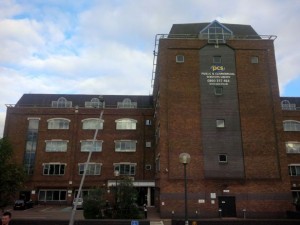 It’s with surprise that we discovered last Friday that a planning application (2014/5052) was submitted to convert the entire PCS office building (Public and Commercial Services Union) at Clapham Junction station into 65 residential flats (comprising of a mix of 18 x 1 bedroom, 39 x 2 bedroom and 8 x 3 bedroom flats ).

Er, in case you want to comment on the application, it’s way too late, as it shows that you had until … 2nd October 2014. Have local residents been notified about the request for a change of use (from business to residential)? Nope! Have the Northcote ward Councillor communicated about this planning application in their Newsletter? Nope! Have the Town Centre partnership (business meetings) been notified? Nope! And more important: have the employees of PCS been informed? Nope!

Actually the staff was only told on 24th October by Mark Serwotka, General Secretary, in an official communication saying:

“Staff may recall that back in 2008 we were approached by property developers for the acquisition of the PCS Clapham office as part of the development of Clapham Junction. […]

As we reported in 2008, exploratory talks were held with developers. But then the global financial crash took hold and interest in the Clapham site quickly waned. Unsurprisingly, with the upturn in the economy. developer interest in our Clapham site has been rekindled. The potential development of Clapham Junction, taking account of station footfall, has obvious attractions for developers.

This is to inform staff that we are in discussion with our property advisors to establish the level of interest and what potential options exist for us to explore. […] In line with this , we have been advised to lodge a planning application with Wandsworth Council in order to maximise the potential value of the building and have done so.”

According to PCS internal union (P.F.L.C.P.S.A) it might be linked to the failure of the merger with UNITE (refused by delegates) and the wish to find other funding.

PCS is the Trade Union in occupation at Falcon House, since its construction more than 20 years ago. Many of PCS’s staff either live locally in Clapham Junction area or are reliant on the proximity of rail services at Clapham Junction station for their journey to work. The PCS is one of the few major employers still present in Clapham Junction, with a staff of approximatively 240 who, together , contribute significantly to the social and economic life of the centre. As the Head Quarter of a trade union with 300,000 members, Falcon House receives as many as 350 visitors per week according to a contribution sent to the Planning Application Committee in 2009.

In their objection to the proposal to erect two 42 storey towers at the station in 2009, they told the Council that the developer’s proposal was making “no reference on effects of the loss of 241 full time jobs in Clapham Junction“. Therefore we can only be surprised now that the same people who objected against the loss of jobs are fulfilling quitely the same purpose.

In a submission to the Council, the Clapham Junction Action Group wrote at that same time:

“The fundamental problem with the scheme is that it has been developed under a system of appraisal that has only looked at the values of office space as is currently available at Clapham Junction. With the availability of only sub-prime office stock, and inadequate levels of floor space availability, the current market for office is severely under-shopped and under-valued. If the development were to seek to establish prime office units at this location, then the evaluation of these units, based upon the accessibility of the location, would be quite different. It would then work to set a new benchmark to enable further inward investment and development of office and workspace uses in the area, including land at LIDL and Boots.

With such great accessibility to Central London, both airports, and the highly skilled and qualified workforce of South West London and Surrey, this location could easily attract a major international company as an occupier, lifting up the business profile of Wandsworth as a whole.

[…] More residential will do nothing to improve the area and provide little in the way of a much needed daytime economy for caterers, service providers, retailers and convenience stores in the area.

Without developing a stronger daytime population at this location the viability, of the whole retail scheme is at risk; considering the fact that the Westfield London is only 11 minutes away, and will only become more accessible as the London Overground service improves over time.”

The New Permitted Development rights​ give little possibilities for the Council

The lack of notification might have been induced by the little power left to the Council to decide a change of use, since the government introduced some new Permitted Development rights in May 2013. Key changes (in our case) include the permitted change of use from office (B1 use class) to residential (C3 use Class). This new permitted development right is temporary and will expire on 30th May 2016 (thus maybe the need to act now)0 to be granted permission). In other words, there is no requirement for planning permission and this is now given automatically through PD rights (except for listed buildings).

However, PD rights can be removed by the local planning authority, either by means of a condition on a planning permission (lack of transport access, flooding zone), or by means of an Article 4 direction. Thus, the GLA has applied for all of central London, i.e. the City, the West-End, the Tech -City in the east, to be exempted from the new PD rights, therefore it does not apply to Nine Elms in Wandsworth.

The Council could have chosen to restrict permitted changes of use from office to residential by making an Article 4 direction as several other Boroughs did (this could apply to a specific area, e.g. Putney Town Centre or the whole Borough). An Article 4 Direction is an order made by a local planning authority to restrict and remove certain PD rights. This can be used for conservation area, or to exclude the town centre zone from the new PD rights.

Although the Council acknowledged (Strategic Planning and Transportation Overview and Scrutiny Committee – 24th June 2013) that in June 2013 some outer London boroughs were looking at making such directions, they decided to abstain in fear of being subject to possible claims for compensation. In fact many borough applied for such exemptions: Islington challenged the Secretary of States and got an exemption for a large part of the borough, Croydon argued of its origin back in the 50s as an office location in its centre, Brighton confirmed an exemption affecting its centre, etc.

The officer in charge argued that as the rule is likely to change in the coming months, there will be a need for the Councils which got an Article 4 Direction, to ask for a new one.

In other words, as Wandsworth Council did nothing, they won’t need to re-apply for something. The loss of offices (with a potential of getting some money through new developments) seemed more appealing than the risk of being subject to compensation if protecting the areas.

The Council sees a surge of tower aapplications

In any case we can be certain that the plan as presented for the conversion will not apply anyway, as this is only an operation to maximise the value of the site and sell it to a future developer which will apply for a totally new scheme.

And as Wandsworth’s officers are currently considering favourably all towers between 25-30 storeys (even in location when their own planning documents say they are inappropriate) you can be certain that they would look favourably to one or more similar towers for the vacant area.

Today, PCS’ fate in Wandsworth resides within its staff and the decision made by the delegates of the Union.