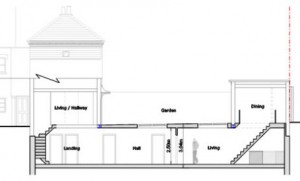 A residential extension (p.a 2014/3230 & 2014/3430) was granted last August to build a basement extension under a Grade II listed building, garden and outbuilding to provide additional level of living accommodation.

“My motivation for the project is quite simply to create space. I have a young growing family and small dog and require more space for what seems to be a never ending supply of toys and nappies!”

It is assume that the excavation would be dug using a mini digger on site, and then transported to a skip using a handheld or driven mini dumper.

The owner said that the idea came from the successful basement application next door (p.a. 2013/2583). However that application was related to a single-storey rear extension and described in the officer’s report as a “modest projection”, a “proportionate addition to the property” and a small cellar refurbished. Nothing to compare therefore with the above proposal for a huge basement, underneath all the house, the garden and its additional building.

While 12 neighbours objected to the proposal (no supports), they were ignored by Wandsworth Council which decided to grant planning permission.

One of the objector has now decided to file a judicial review, in order to contest the decision. The important points raised by the objector in a letter addressed to the members of the Planning Committee are:

In addition, it is noted that the National Planning Policy Framework (NPPF, para 129) says:

“Local planning authorities should identify and assess the particular  significance of any heritage asset that may be affected by a proposal  (including by development affecting the setting of a heritage asset) taking  account of the available evidence and any necessary expertise. They should  take this assessment into account when considering the impact of a proposal  on a heritage asset, to avoid or minimise conflict between the heritage asset’s  conservation and any aspect of the proposal.”

And it appears that the officer recommendation omits the internal arrangement of buildings, the demolition and rebuilding of the garden wall and the impact on significance through the connection between the 2 dwellings though the basement.

David Andrews, previous Wandsworth Conservation Officer, raised an objection to the same scheme in a previous application, but his comments were omitted in the report presented before the Planning Committee.

We will look forward to the outcome of this Judicial Review. Two years ago a pre-action protocol letter (first stage of the Judicial Review) against Wandsworth Council lead the Council to squash their planning permission.