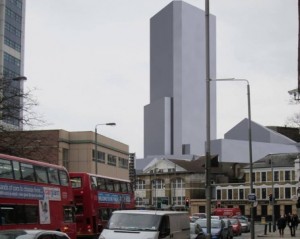 Impact of the Ram Brewery development as granted by the Council

In a statement in the Observer at the end of March, signatories from sculptor Sir Antony Gormley to philosopher Alain de Botton, author Alan Bennett, Stirling prize-winning architect Alison Brooks, and London mayoral hopefuls Dame Tessa Jowell and MP David Lammy warn: “The skyline of London is out of control.”

More than 200 towers of at least 20 storeys are under construction or being planned, of which three-quarters will provide luxury residential flats, according to New London Architecture (NLA), a discussion and education forum.

The Skyline campaign, organised jointly by the Architects’ Journal magazine and the Observer newspaper, demands a new mayoral Skyline Commission “to review and enable well-designed development” as well as a new policy for tall buildings that “ensures high-quality architecture.”

In their statement, more than 70 signatories, including societies and associations, write:

“Over 200 tall buildings, from 20 storeys to much greater heights, are currently consented or proposed. Many of them are hugely prominent and grossly insensitive to their immediate context and appearance on the skyline.

This fundamental transformation is taking place with a shocking lack of public awareness, consultation or debate.

Planning and political systems are proving inadequate to protect the valued qualities of London, or provide a coherent and positive vision for the future skyline. The official policy is that tall buildings should be ‘well designed and in the right place’, yet implementation of policy is fragmented and weak.

Too many of these towers are of mediocre architectural quality and badly sited. Many show little consideration for scale and setting, make minimal contribution to public realm or street-level experience and are designed without concern for their cumulative effect and impact. Their generic designs, typical of fast-growing cities around the world, threaten London’s unique character and identity.”

“Nobody could go to the places already being shaped by towers – Elephant and Castle, Vauxhall or Stratford High Street, a discus-throw from the Olympic Park – and say that these are great places to linger, or that the tall buildings now rising there enhance the experience. Images of these places in the future, when further skyscrapers will jostle for attention, suggest more of the same. New urban zones are being created with no overall idea of how the parts contribute to the whole, of the places that are being made at their base.”

Back in 2005, the St George Tower, in Vauxhall, was granted on appeal by John Prescott, despite advice from his advisers that it “could set a precedent for the indiscriminate scattering of very tall buildings across London“. Here we are: either the Labour deputy PM was completely blinded or full of cynicism, but 10 years later the warning of the advisers becomes a reality: 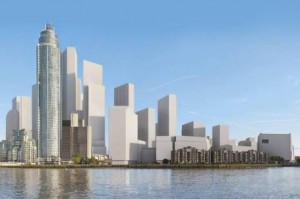 How the view along the Thames from Vauxhall/Nine Elms might look. – photo from the Evening Standard 14/04/2014

There is a very good series of animation “before/after” where you can view the dramatic impact of the new skyline in a few years by clicking and sliding on the images:

All this campaign echoes our criticisms on Wandsworth Council’s attitude, making frequent decisions in breach of local and national policies, and blatantly ignoring local community outcry.