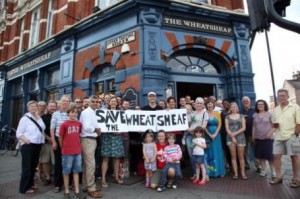 Campaigners outside The Wheatsheaf – Wandsworth Guardian 20/08/2013

In our area alone, The Galleon, 2 Lavender Road; the Pine Tavern, 69 Plough Road; the Queen Victoria, 82 Falcon Road and the Somers Arms, 2a Rochelle Close are four examples of pubs near Clapham Junction that have been demolished and replaced by housing developments over the last 15 years.

The Duke of Wellington, 105 Meyrick Road has been converted to flats as has the Haberdashers Arms, 47 Calvert Road. Permission has just been granted by Wandsworth Council for demolition of the Battersea Bar (originally the Chopper) at 58 York Road and a stone’s throw from Sambrook’s Brewery and its replacement by a residential block with commercial use on the ground floor.

Chatham Road, a road that had 5 pubs 100 years ago, now has only one since the ‘Gardeners Arms’ has been recently replaced by an expensive block of flats + commercial use.

An application for development in place of the Prince of Wales 186 Battersea Bridge Road has just been refused. No doubt they will be back so sign the petition!

The very popular ‘The Castle’, with its large enjoyable garden, in Battersea High Street lost its fight despite 700 people fighting for it for 12 months. It will be demolished and turned into a 4 storey block. According to English Heritage, there has been a pub on The Castle’s site since the 17th Century.

The Wheatsheaf in Tooting is fighting for its life. After a fierce campaign by local people the Council has agreed to give The Wheatsheaf an AVC (Asset of Community Value) which gives members of the community time to bid to buy the site (a beautiful building too) should it come up for sale.

‘The Localism Act 2011 gives communities with a local connection a right to identify properties which, if they came up for sale, they would want to try and purchase. The legislation does not give a right to buy the property in question – but it does give potential bidders the time to put a proposal together.

The AVC is a tiny concession that buys time but is not what the Localism Bill was sold to us as by the Government. The Localism Bill gives so much power to the Council to place almost impossibly high jumps at every stage of using it, that it is all but useless. And even if the community can raise the money, the owner has no obligation to sell it to them…indeed, an incentive not to, given that the community has just cost the owner time, trouble and profit. I imagine some developer has folded his paws and is cleaning his whiskers while he waits for local people not to be able to afford to buy The Wheatsheaf.

We need our Council to actively defend our interests, to take notice of the results of so-called ‘consultations’ instead of treating local opinion as a bed of nails for the Council must walk over on the way to its own preferred option.

The Campaign for Real Ale (Camra) said 253 pubs had opened between the end of 2012 and the first part of 2013, but 362 had closed, meaning four pubs were shutting every week in in London and the south east.

Why ? Is it because people don’t like pubs any more? No, of course not.

The problem is not only down to the Council’s attitude to the loss of amenity, it is also down to the way in which the Pub business has been transformed over the centuries from individually owned hostelries buying beer from local breweries into very big business with Breweries and Banks owning thousands of pubs in huge groups and draining them dry of profit for the benefit of themselves and their shareholders.

Supplies of beer and prices of beer are nearly always tied to specific breweries and companies, and make it impossible for pub managers/ lessees to be competitive with supermarkets and, for that matter one-another. Pubs are also heavily policed by the companies concerned to make sure they are not ‘cheating’. The jolly publican has a hard life these days.

Multiple-held pubs do exist in countries other than the United Kingdom, but due to most countries having different accepted systems of ownership and supply, they do not hold anywhere near the level of control over the market as they do in the UK.

Here in the UK, a mixture of stifled competition leading to low returns both for the companies concerned and the Pub managers/ lessees, combined with a rise in real-estate values leads to ruthless selling-off of our social amenities. Companies exist to make money for their shareholders; pubs are no more important to them than ‘white goods’ or blocks of flats. It’s just money! But for us it is the way we live our lives and we should have some protection of our amenities.

Debate in parliament to create a new statutory code for pubs

But there is some hope. Even Parliament is at last recognising that an abusive system is destroying competition and killing the pub trade.

“In a move supported by Labour leader Ed Miliband and shadow business secretary Chuka Umunna, Toby Perkins [LABOUR’S shadow minister for pubs] will call for a pubs bill to introduce rent reviews, a free-of-tie option to allow landlords to purchase products on the open market, and an independent pubs adjudicator. Perkins said: “The Campaign for Real Ale (CAMRA) estimates that 26 pubs close each week and that each closure costs local economies £80,000. The all-party Business Select Committee has investigated this issue several times and concluded that the unfair and unbalanced relationship between pub companies and their licencees is a huge factor.

The issue has been debated in parliament twice before and in 2012 MPs voted for a code to be introduced, but progress has been slow.

A spokesman for the Department for Business, Innovation and Skills said it would publish a response to its consultation on the code “in due course,” adding: “There has been, and continues to be, a high level of interest in the consultation on pub companies and tenants. The fact that we received over 1,100 written responses and more than 7,000 responses to the online survey demonstrates this.””

However the pub companies are fighting back and blaming it all on the Supermarkets. Take your choice! There is not a lot we can do except sign petitions and make sure our politicians know we are not happy.

>>> Petition to the Government

More detailed information about the Byzantine ways Pubcos work to the disadvantage of the managers/lessees of pubs HERE.