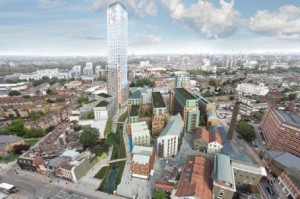 A computer image of Ram Brewery site in Wandsworth with 36-storey tower and flats, as displayed by the Evening Standard

The news came at a shock for many, as yesterday it was announced that Greenland Group, the giant state-owned Chinese property developer has bought the Ram Brewery site, Britain’s oldest brewery (beer had been brewed at the site continuously since 1576 and the Young’s Brewery opened in 1831).Minerva (which was bought by Delancey Real Estate two years ago) was granted planning consent by Wandsworth Council just a few months ago, to build a 36 storey building, along with many 9-12 other buildings, at the heart of the conservation area, beside a number of listed buildings. The scheme includes 661 units (with only 66 of them – 10%, all in the same block 9 – being affordable, i.e. shared ownership, which will never get build before the decommissioning of the gas-holder beside). There is no social housing at all.

“Beer had been brewed at the site continuously since the 16th century, in 1831 becoming the home of brewers Young & Co, which maintained the pub that gave the brewery its name.

To the consternation of real ale lovers and against the wishes of its chairman, John Young, Young’s sold the brewery in 2006 under pressure from investors to cut costs and cash in on rising property values. Young, the great great grandson of Young’s founder, said at the time: “My head has ruled my heart.””

Greenland has projects in 80 cities throughout China, as well as investments in Jeju in South Korea, Pattaya in Thailand, New York and Los Angeles  in the US and in the Australian market, and it follows rival Chinese developer Wanda’s announcement to build a 60 storey skyscraper in Nine Elms, (mostly luxury flats with a small portion considered as “affordable”).

Zhang Yuliang, chairman of Shanghai based developers Greenland Group expects the development to be hugely attractive to Chinese investors. He said:

“There have been more individual investors who favour the UK market, thanks to the stable return on assets, high-quality assets and sound market liquidity.”

In a statement issued yesterday to Bloomberg, he said:

“The prospect for our overseas property business is great. Rich and middle-class Chinese will be the main buyers of our projects.”

“[Mr Yuliang’s] comments will increase concern that Londoners are being priced out of new developments by foreign buyers, although property companies insist sales to foreigners play a crucial role in making schemes financially viable. Greenland Group, best known for building China’s tallest skyscraper, also said it is investing another £600 million on a 40,000 sq ft site in Canary Wharf.”

“Greenland’s investment into London follows a burgeoning trend of foreign investors buying up luxury residential property, as a second home, or as a buy to let business, as well as commercial real estate across the Capital. Overseas investors continue to see the UK as a safe haven from the volatility of the debt and equity markets.”

While most of the to-be-built-yet flats in Battersea Power Station (bought by Malaysian  investors) have already been sold through a Singaporean agent, it confirms the worries expressed during the Parliament debate about properties being bought by foreigners, last June.

However the trend is greatly encouraged and pushed by David Cameron, George Osborne and Boris Johnson to encourage bigger Chinese investment in Britain. Ravi Govindia, Leader of Wandsworth Council, said:

“This is more good news for Wandsworth Town and another vote of confidence in the council’s ambitious regeneration plans. The Ram Brewery now has an owner with the experience and deep pockets needed to unlock its enormous potential. […] It also delivers on the council’s top priority which is to redesign the Wandsworth Gyratory and remove through traffic from the high street.

We look forward to working with Greenland Group to see this important project through to completion.”

The future will tell who was right but politicians are currently playing a very dangerous game with foreign investors, while everyday shows that they do not address the need of local people for affordable homes.