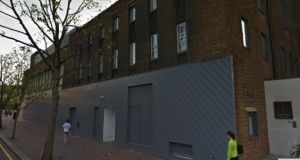 Planning application for the former Granada cinema redevelopment  was granted with plans to implement an active frontage with shops along St John’s Hill Road. However, after years of site construction panels, we are left with a long grey painted wooden hoarding, and no active marketing to open any retail unit soon at that place.We have wrote to the Council for their acknowledgement that the former Granada Cinema development has not been built as consented, and for their support that Wandsworth Planning Department will take appropriate measures to ensure the owners of the property do comply with their duties in regard to provision of the retail units fronting St John’s Hill.

Planning & listed building consent were approved on 7th September 2006 (ref: 2005/4544) for the new residential units; the conversion of the auditorium for the use of a church; and to use ancillary space for retail, office & restaurant space.

The image below is the southern elevation facing St John’s Hill, which was received by Wandsworth on 21st June 2010 as part of some general amendments, and clearly shows the open windows on the ground floor for the retail units still remaining.

The planning committee decreed on the 16th February 2006 to grant listed building consent subject to the following conditions, with the 13th condition relating to the retail units, and copied below for your information:

13. Notwithstanding what is shown on the approved drawings details of the new shopfronts fronting St John’s Hill shall be submitted to and approved by the local planning authority prior to commencement of the development hereby approved.

The frontage facing St John’s Hill was described by the projects architect as providing an important addition and enhanced the public realm for the entire development. They also stated that the retail units would provide an active frontage, also considered to be of importance, and no doubt the addition of these units would have swayed the committee.

Alterations to the interior auditorium for the church were approved on 28th July 2011, and included within the application was a ground floor drawing, depicting the retail units fronting St John’s Hill as being protected. On the drawing it states “Future retail unit – subject to separate planning application”. As per the above planning condition, details of the shop fronts must have been approved; otherwise the development could not have commenced. A snippet of this plan is shown below:

Unfortunately these retail units have not been installed as per the planning consent. At no time has the developer actively marketed the units, which would only ever be feasible once the units were completed. The cost of fitting out the units would have been accounted for within the development appraisal (with little or no value applied), and therefore the developer is profiting from non-compliance of these units, and Wandsworth is missing out on business rates, employment and an addition to the local environment.

For too long the St John’s Hill frontage has been a painted wooden hoarding, which detracts from the quality of Clapham Junction town centre, and is wholly unacceptable to this high quality neighbourhood. I would be astounded if the hoarding meets Wandsworth’s stringent design guides, and if there is nothing the Council can do, then it sets a dangerous precedent for other developments.

Wandsworth Council has a duty to ensure that such a visible and prominent development is completed as per the consent, and forces the owners to take action to comply with their own design.

We look forward to hearing from them, and understanding what actions can and will be taken to rectify the situation (a letter on that matter was sent to Wandsworth Council Planning department on Tuesday 17th Dec.).