As usual when I attend the Clapham Junction Town Centre Partnership (business associations) meeting, I give a quick feedback on some specific points that were discussed. This time the Chair invited us to Battersea Power Station. As it was our last meeting festive refreshments were provided (and enjoyed!). 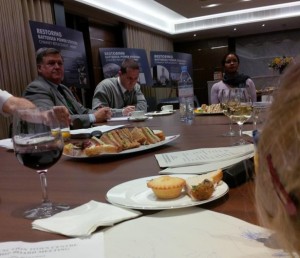 For the first time (maybe the last one too as it is a bit time consuming), I provided a live-tweet of the meeting with #cjtcpb (click on the hash tag to see it). I remind everyone on Twitter that they can follow us on @c_j_a_g.

The Junction: There was only 20 lights to put for the heart of Clapham Junction, so a difficult choice to make. But at least there will be something this year again.

Northcote Road: The event organised to turn the Xmas lights on, on Thursday 28th, was a big success. An enormous success. In fact it was so successful that it will be necessary to arrange barriers next year in order to manage the crowd.

St John’s Hill: No lights and Xmas trees this year. The business association decided to save the money and organise a bigger event next year.

Battersea High Street: We managed to plant 25 Xmas trees with lights along the street off Battersea Park Road.

Lavender Hill: There is a major on-going complaint from the business of Lavender Hill which feel completely neglected by the Council and ignored by the local councillors (Shaftesbury ward – all of them members of the Council’s cabinet!). They plan to send a letter to the leader of Wandsworth Council about “Lavender Hill Rejuvenation“. Their main concerns are:

The Clapham Junction Town Centre Board has been asked to endorse the letter (decision at the next meeting).

The Battersea Society also commented on the consequence of the right turn and road amendment at Lavender Hill-Falcon Lane Junction (Asda): as a consequence it created a sort of rat-run with many car speeding fron Lavender Sweep to Falcon Lane and a large increase of difficult traffic at that crossing.

The Police wants to promote a scheme where people arrested (not convicted!) for shop-lifting and criminal offence will be automatically banned from shops (their photo will be displayed on a website and shops will be able to consult who is on the list to ban them from entering the shop). There was a long discussion as whether this is “ethic”, will not lead to mistakes (sanction is applied before sentencing) and abuse. Apparently questions such as the possibility of appeal against the ban, and whether that appeal will defer the ban are not very clear (or at least I did not understand clearly).

Battersea Power Station: amongst the daily news, inspection of the chimneys is underway and they have decided not to use Palm oil for their energy

Planning: The most noticeable are dealt here in articles:

Next meeting will be in February 2014.