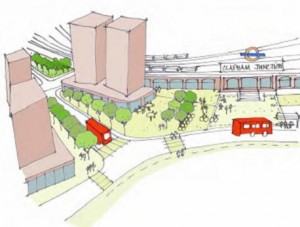 Winstanley and York area redevelopment proposal suggest 4 towers up to 20 storeys close to the railway, beside CJ bridge.

The Council has been presenting four different improvement proposals for the estates and asked for views on their relative pros and cons. According to the Council’s website, these options are not fixed, and they could be blended and combined to form a new outline plan for the area.

We welcome the current consultation and presentation of different alternatives for an overall project that could cost more than £100m. Depending on the preferred option there is now an opportunity to change the whole area for good, and we appreciate the attention to listening to the local residents.

However, we have great concerns on one aspect of the plan that  have not been opened to discussion yet (or at least which is not on the part that is put forward in the consultation exercise): the set of towers that is planned for the area closer to the railway. 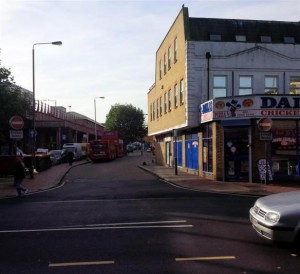 We have been discussing with the project team during a session at the York Library and have expressed our worries that – although we understand that this is a series of draft proposal – architects are in the view that more towers are suitable in Clapham Junction Town Centre.

Back in 2009, Metro Shopping Fund proposed to build two 42-storey towers on the South side of the rail way (Clapham Junction approach). You can still find on our website, as well as on other groups, societies and local newspaper’s websites evidence the overwhelming opposition within the community (about 700 different letters of objection received by Wandsworth Council in only a few months, along with more than 900 signatures in petitions). The project was eventually withdrawn hours before to be decided by the Planning Application Committee.

Here are a few quotes from the hundreds of letters received, specifically quoting on Winstanley:

“The nearby ex Local Authority Council 60′s/70′s tower blocks in Battersea do not set any kind of precedent for development of this form and merely act as an example of what should not be repeated. The only more modern tall buildings in the area are positioned a significant distance away in the Wandsworth riverside area.”

“The photo spread across the opening page of the council’s “Our Wandsworth” brochure amply demonstrates how out of scales and unsympathetic in character are the few existing high-rise blocks in the area. Standing out like a sore thumb is putting it mildly. Places like the sad, greying concrete towers of the Winstanley Estate are a relic of the Sixities craze for high-rise. As a “good place to live” quote part of the slogan you spread across the aforementioned photo, they have been discredited and many of their fellows have been demolished. (…) Cutting them down a few floors – a favourite developer’s trick – is not an option. At 21 floors they’d still be an eyesore. No towers. Period.”

“The towers will be unneighbourly.”

“The sudden rash of developers trying to stick up towers in Wandsworth is even more out of place. The developers won on the Ram Brewery because Wandsworth’s own centre is already so fatally compromised by the shoddy Arndale centre and traffic blight that it has lost any focus and character and possibly has fewer residents in the immediate area. In Putney the developers lost because it still has heart and integrity and many locals living near the High Street… With the cafes and bars and small shops around Battersea Rise, Northcote Road and St John’s Hill, and Clapham Common nearby we have a village feeling, and you do encounter local friends on the street.  It is a comfortable, human-scale place to be – and a Conservation Area. Those alien towers would overshadow everything, with no way to avoid seeing them.”

“I am not prepared to stand by and let the Borough of Wandsworth become just another ‘clone town’ in Britain are you?”

“I grew up in Croydon, a place which is testimony to the way a characterful and interesting dormitory town can be ruined with ill-conceived skyscrapers. … What are presently friendly, liveable spaces are fast being eroded.”

In the more recent Peabody redevelopment, granted by the Council despite an overwhelming opposition, the local authority received more than 300 letters, with similar arguments:

“I am concerned by the continued attempts to increase the height of buildings in an essential low-rise area. This application is being made despite the ‘twin towers’ Clapham Junction development being declared unsuitable. I believe the same arguments apply in terms of the proposed Peabody development.”

“The height of the proposed building is unacceptable and will make a far too dramatic dent in the skyline. The residents of Clapham Junction have already spoken as one of their unwillingness to accept over-height buildings, yet, once again, one is planned.”

“My objections are very much in line with those I, with many others, voiced three years ago when the Twin Towers project at Clapham Junction was being considered.”

“Having managed to oppose the development of a [16-storey] hotel at Clapham Junction itself it is exhausting to think we have to go through the whole process yet again.”

“We said as a community NO to the Clapham Junction Station proposed skyscrapers…and as a Community we again say no to this yet another attempt at the thin edge of the wedge.”

Last but not least, when new ideas for a much needed redevelopment of Clapham Junction station emerge in the future, almost any extravagance could be proposed. Who can credibly argue that 10, 15, 20, 25… potential storeys beside the railway will not set a new precedent for height on the other side? Many local residents are convinced and voiced their concern for the area:

“I also feel that the taller the buildings you allow on the site, the more of an excuse developers will feel they have to re-submit future plans for the skyscrapers at the station.”

The proposed site is ideal to redevelopment, but as it will be highly visible not only from Clapham Junction station but also from Falcon Road, Lavender Hill/Asda, Northcote Road, development should be sympathetic with the whole area. 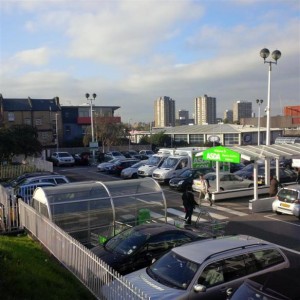 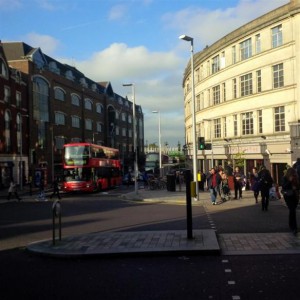 According to the current consultation from the project team, at the question “What would You Like to Change?”, the first answer you received is: “Improved homes with fewer towers”. It is in complete contradiction to creating 4 more towers in the area. 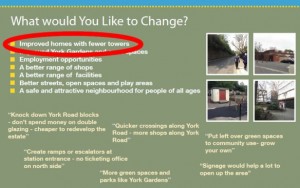 It is adamant that on the one hand, there is an aim to lower the height of the existing estates, which can be achieved according to plans with 4-5 low rise quality building while increasing considerably the density of the area. On the other hand, while the east side of Falcon Road is also made by 3-4 storey buildings, with Victorian houses in the areas named little India, there is a proposal not knock down an existing 2 storey building (in great need of redevelopment, with no contest) to erect more towers.

The Core Strategy, part of the Local Development Framework (LDF) for Wandsworth borough, was submitted to the Secretary of State in March 2009 and finally adopted in October 2010.

The Council released a Core Strategy Post Submission Version Sustainability Appraisal, in September 2009. On page 198 (Policy PL13 – Clapham Junction and the adjoining area) of this document they made two amendments following the Inspector’s concerns that the current policy did not include specific reference to account being taken of the historic context when assessing applications for tall buildings.

The minor wording change makes it very clear that proposals for tall buildings will only be acceptable in Central Wandsworth and the Wandle Delta if they can justify themselves in terms of the criteria in policy IS3 (including reference to historic context).

Clause b) was therefore amended to add (amendment in bold):

Taller buildings could not only help deliver significant regeneration benefits but also give a visual focus to the town centre, subject to the qualifications set out in Policy IS3 and the criteria based policy on tall buildings to be included in the Development Management Policies Document.

Albeit still referring to the fact that taller building “could give a visual focus to the town centre“, they also amended Clause e and removed reference to the Clapham Junction Station site being potentially suitable for tall buildings, following concerns from the Inspector that specific reference to sites within these broad areas is not appropriate at Core Strategy stage.

Clause e was therefore changed to remove the following mention of taller buildings:

Taller buildings in this location could be justified due to the proximity of Clapham Junction station and its accessibility to high frequency public transport.

On the picture produced in the draft Urban Design Study, (later removed from the local plan documents as the indication of acceptable upper limit was judged inappropriate by the government inspector) we can see that the proposed redevelopment of Clapham Junction station area with the failed twin 42-storey towers would have been very unlikely as it fixes the limit to 20 stories; and the 16-storey hotel proposed for the bottom of Mossbury Road would have also been considered from start as well above the limit of 8 storeys. 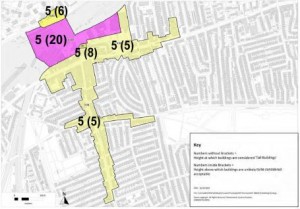 The picture shows also that any building above 4 storeys will be considered as a “tall” building in Clapham Junction area.

Although this map does not appear in the planning document (and the majority of local resident have major concern about taller building for the station), it could still be considered as a guideline: the site at the bottom of Mossbury Road was considered appropriate to a maximum size of 8 storeys; it is now a 8-storey Travelodge hotel indeed.

Thus you can see that the site at the corner of Grant Road/Falcon Road is considered, by Wandsworth planners, as suitable for a maximum of 6-storey building.

In the Winstanley and York Road estates, the SSAD document says:

“Tall Buildings: In accordance with Core Strategy Policy IS3d, tall buildings in this location are likely to be inappropriate.”

Existing policy suggests that it extends to the whole area, and that new developments should be limited to 5 storeys, to not repeat the mistakes of the past and increase the current divide between the two sides of the railway.

An opportunity for Wandsworth Council to re-unify the whole community

When the Clapham Junction area was developed at the end of the 19th century, with Alfred Heaver building some 4,500 houses, the south and north of the railway where both part of a homogeneous community. This has been destroyed by the Word War II and the towers and blocks that were built later as part of Winstanley, Falcon and York estates would have difficulties to get any support nowadays.

If something needs regeneration, this is undoubtedly this area. And there is plenty of space to build something green, with increased density for much needed social housing, and low rise.

We do not want to repeat the mistakes of the past and accentuate the current trend that allows towers and taller buildings to be in the deprive area of Grant Road and Winstanley estate, while homogeneous Victorian and Edwardian property sit on the south side of the bridge. And we do not think that the solution should be to put taller building everywhere either.

Wandsworth Council has got the opportunity to repair some mistakes of the past with a desirable scheme, widely approved and well integrated to the whole of Clapham Junction. Local residents say they want fewer tower, please listen to them.

If you want to let them know your views, please write to:
winstanleyyorkroad@wandsworth.go.uk
Tel: 020 8871 6802