As I was browsing the Council’s policy on Clapham Junction Conservation Area, I found fascinating the different maps showing how Clapham Junction has transformed through the years. It is especially interesting in perspective to the visioning exercise for the future of Clapham Junction (where Mosaic’s team said that the area has deeply changed for the last 10 years and that within the next 10 years CJ will be completely different; they obviously did not know about the change between 1874 and 1896!), but also as there is currently a plan to put large (nearly 2 storey high) electronic advertising board in the conservation area. 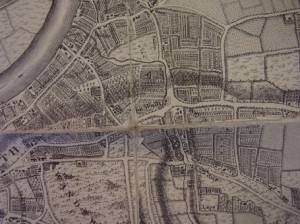 John Rocque’s map of 1745 showing roads that are recognisable today, but most of the conservation area as fields with the exception of a few buildings along St John’s Road with the old Falcon Brook behind them

Although the earliest reference to the area is a mention of the ‘Ryse’ in 1656 (now Battersea Rise), the proximity to the Roman Road ‘Stane Street’ suggests earlier settlement in the area.

At this time the only developments in the area were a few isolated villas, farm buildings and possibly commercial buildings. Many of the fields were used for the commercial production of Lavender, a crop that was used for the perfume industry; hence the street name: Lavender Hill. There is a reference in 1767 to a public house ‘the Foulcon’. The 1871 O.S. Map shows a horse trough outside the original public house, which no doubt had become a popular staging point for horse drawn traffic. 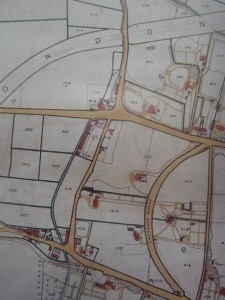 The tithe map of 1838 shows the railway laid out but as yet undeveloped. Amongst the small number of country villas shown is the Chestnuts on Lavender Hill (not labelled), a house that has been much altered but of which the remnants survive amongst the terrace housing on Mossbury Road (outside CA)

[You can also see the farm in between plots 503, which is currently #22 Mossbury road]

The first railway to be constructed was the London to Southampton line (1838), which terminated at Nine Elms, but at this time there was no station at
Clapham Junction. The Richmond railway line opened in 1846 and in 1848 a third track was completed from Vauxhall to Falcon Bridge, together with the opening of Waterloo station as the main terminus; and in 1860 a fourth track was added. As a result, the London and South Western Railway (LSWR) decided that an interchange station with the West End and Crystal Palace, the West London Extension and the London Brighton and South Coast Railways (LBSCR), could be justified. In 1863 the new station at Falcon Bridge (i.e. Clapham Junction) was opened where the Richmond railway branched away from the main line. Each company had their own platforms and entry to the station was from St. John’s Hill. A long subway linked the north and south sides of the station, only six feet wide. New buildings for the LBSCR were opened in 1874 and those of the LSWR in 1876, the latter being architecturally more significant.

The construction of the railways and the opening of the stations was the catalyst to the development of the open fields of Battersea and Clapham, which were progressively transformed into new housing estates. The strips and furlongs of Battersea’s fields often represented the boundaries of the new residential estates. Between 1840 and 1910 some 141 building estates were developed in the parish of Battersea. The population increased during this period from 6,000 to 168,000. The Falcon Brook, which was an open river running along the line of St. John’s Road was culverted at this time. 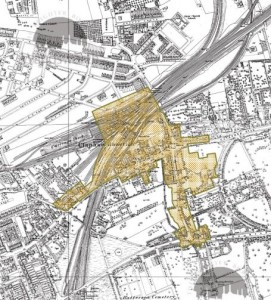 The Ordnance Survey map of 1868 – 1874 shows the railway lines now built with the booking office and access tunnel. A trough is shown at the crossroads by the Falcon public house (also shown, but not named). St John’s Hill is the most developed street at this time

[And in 20 years, Clapham Junction transformed from mostly fields to a dense populated area with rows of similar Victoria terrace houses (developer Alfred Heaver built 4,419 houses in the area!). You will also notice that all what is now made by the tower blocks of Winstanley estates was originally similar to the terrace houses of Eccles road, lavender Sweep, etc.] 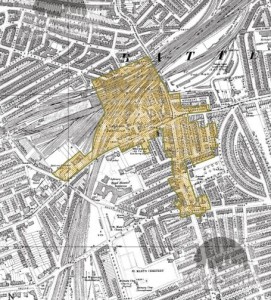 The OS map of 1896 shows the conservation area largely as we see it today. There are now two pubs at the Battersea Rise crossroads (although today only the Northcote survives), Arding and Hobbs has been built, the Falcon Brook has been culverted and the line of a trolley bus is shown along St John’s Hill, Lavender Hill and Falcon Road

The early housing was mainly for low-income families associated with the local workforce. During the latter quarter of the nineteenth century, though, this changed to more speculative housing. The developer Alfred Heaver made an enormous impact on the Battersea townscape with the construction of some 4,419 houses in the area between 1878 and 1898.

The construction of houses brought with it a demand for goods and services and St. John’s Road, Lavender Hill and St. John’s Hill became thriving commercial areas. By 1885 the commercial importance of the area was such that Arding and Hobbs, the largest department store south of the River Thames, was built. A fire destroyed the building in 1909, which was replaced by the current much grander building.

The burgeoning population also created a demand for leisure and entertainment. The New Grand Palace of Varieties (now The Clapham Grand) opened in 1900. The Shakespeare Theatre was established in Lavender Hill, near the former Town Hall, the Pavilion Cinema, with its grand Triumphal arched frontage was built where now the entrance to ASDA supermarket lies in Lavender Hill. Both buildings were sadly lost in enemy action in the Second World War, the latter being destroyed by a V-1 rocket in 1944. The former horse drawn tram depot in St John’s Hill was turned into Pykes Circuit Cinematograph. Later a cinema was built in St. John’s Hill, on the site of the former Battersea Grammar School, and became known as the Granada Cinema. 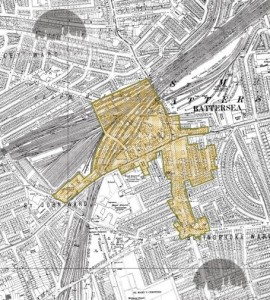 The OS map of 1919 shows the conservation area almost complete although the Battersea Grammar School has not yet been replaced by the Granada Cinema. The footbridge has been built across the railway and the Clapham Grand is shown as the Grand Palace

Change has been constant in the area. A Freemasons School for Girls in Boutflower Road was opened in 1853, but demolished in the 1930’s to make way for the Peabody housing estate. The bombed site of the former Pavilion Cinema remained vacant until the 1970’s, when a supermarket was constructed for Carrefour (now ASDA). The buildings in Clapham Junction Approach, together with the former Sorting Office, were demolished in the early 1970’s to make way for a new development including the current entrance to the station and shopping centre.

However, many historic buildings remain and at the time of writing, the former Granada Cinema is going through a transition in which the auditorium will become a church and apartments will be constructed above.

Clapham Junction was originally part of the Borough of Battersea, which was incorporated into Wandsworth in 1965. 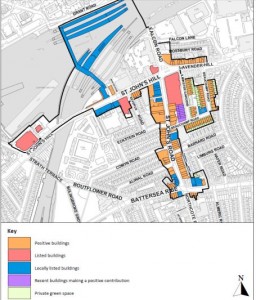