You surely know that larger pavement at the corner of Lavender Hill/Falcon Road, fronting the Revolution bar with 3 (young) trees. This is pictured on the top left of the photo below. Well, well, well, that is an ideal place for a big advertising panel, as some thought! 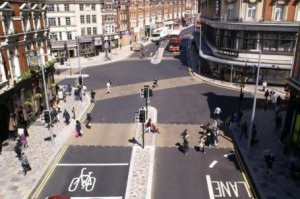 Clapham Junction after the re-modelling of the crossing and paving. From the beginning of October, the application has received 11 objections and no support. Eleven seems already a big number, knowing the fact that the plan was not publicized and mainly kept hidden from the public (I personally live less than 100 yards from the location and I have not received anything).

The common concern to all objections is very clear and simple: while the borough spent millions in improving the layout and pavements of the Clapham Junction area throughout the last 4 years (and the work is still ongoing in St John’s Road), it is a surprise that we are now facing an application proposing just to do the opposite and undermine the public realm.

The site lies inside the Clapham Junction Conservation Area. In its documentation appraisal it says:

“1.9 – The quality of the public realm is important to the area to provide an appropriate setting to the buildings as well as a high quality environment for pedestrians. There are opportunities to enhance the character and appearance of streets by improving the quality of the experience for pedestrians as well as improving its visual character by removing extraneous clutter, rationalizing signing, and by providing good quality materials for surface finishes and well-designed street furniture.

1.10 […] This scheme is now being implemented following clear public support from residents and the business community.

2.1 The fine Victorian and Edwardian buildings represent the distinctive character and appearance of the conservation area. The protection of the retail use to ground floors in the town centre is crucial to maintaining the vitality and vibrancy of the shopping centre.”

In the more recent Visioning Project from the Mosaic Partnership, the study says:

“1.12 – The centre’s main strength lies in the character areas that have evolved across the centre and their distinct identities and offer.”

So what is the planning application suggesting? To improve the quality of experience for pedestrians? To remove extraneous clutter? To rationalize signage? To preserve the distinctive identity of the conservation area? No, rather exactly the opposite!

The Heritage Statement submitted with the application states (take a seat , then read and burst into continuous laugh!):

“A well-designed digital board would not seem out of character or out of place within such a vibrant and busy commercial context. On the contrary it is exactly the type of feature that could be expected in this type of townscape context. The presence of the board at a busy traffic junction in the commercial heart of the area would not materially erode the character or appearance of the conservation area, and instead would be legible as a part of the on-going and ever-changing evolution of the conservation area.”

But perhaps the key argument of the proposal lies in paragraph 8:

“this requires consideration of the wider public benefits of the advertising board, which involves an additional revenue stream to the Council – specifically provision for a ‘cash reserve’ to fund further improvements to the area in the future“.

Already, the three councillors of Northcote ward, Jenny Brown, Peter Dawson and Martin Johnson, have submitted an objection to the Council (and they have also featured their objection in their newsletter sent on October 7th). They said:

“Such a unit will seriously impact the visual amenity of the Clapham Junction town centre.

[…] We believe that the changes being brought about by the “exemplar” scheme are consistent with the aspirations of the Conservation Area appraisal and will result in significant improvements to the public realm of the town centre. However we are of the opinion that the installation of a large digital display unit would run counter to these aspirations and would negate recent improvements in the area.

The unit will adversely affect the free movement of pedestrians; introduce large scale signage which is out of keeping with the surrounding environment and has the potential to distract motorists who are negotiating a complex and busy junction thereby worsening highway safety.”

It refers also to the Clapham Junction Partnership Board’s objection (the representatives of the business associations) which wrote:

“It would undo the effect of the exemplar scheme in the central town centre as the proposed structure is intrusive; is detrimental to the visual amenity of the Victorian architecture of the town centre and could compromise highway safety at an extremely busy junction used by pedestrians as well as vehicles.

When the Exemplar scheme was initially presented to the Board the wide pavement area in that location was presented as an area which would provide a much needed central point in the town centre (e.g. for a Christmas Tree, switch-on ceremonies, gathering point for launches etc).

The Battersea Society is also surprised and concerned that the Council is submitting such application:

Do they try to get some funding for the sweeping and washing of the pavements? The Council said back in August that they were trying to get Transport for London to pay for the cleaning of the pavement. As it happen, the applicant / client is TfL and the agent is Wildstone, who seem to be in partnership with TfL for a London wide proliferation.

The Council has submitted a series of application for advertising boards

“We are also concerned that the borough should submit this and the other similar applications with so few supporting details about the type of advertising to be displayed, the effect on the streetscape or the justification for erecting these signs across the Borough.”

There are indeed a few other applications such as 2013/4034, on the pavement beside Asda’s entrance (Land Adjacent to 202 Lavender Hill SW11) which is well described by the Battersea Society as “visually intrusive, add unnecessary street clutter and create an obstruction to pedestrians” (we all know how busy it can be in front of Asda, not even talking about the amount of street furniture and cluttering already existing on lavender Hill). As well as planning application 2013/4032 (Land Adjacent to Queen’s Circus Roundabout Battersea SW8).

“We believe that these huge signs are totally inappropriate and unacceptable in these locations and are in direct conflict with the Conservation area and established policies including Policy DMS 8.”