Next Tuesday, 23rd July 2013, the Planning Application Committee will attend an extraordinary meeting to approve the new planning proposal for the Ram Brewery. 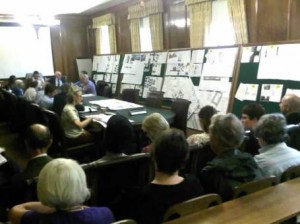 Committee meeting room 123 (on the left the Tory Councillors, on the right, the Labour, at the end the Chair surrounded by the officers.

The proposed scheme includes the erection of a 36 storey building, along with many 9-12 other buildings, at the heart of the conservation area, beside a number of listed buildings: the Grade II* listed Ram Brewery building, the Grade II listed Brewer’s House at 70 Wandsworth High Street, and at the northern end of the site, a Grade II listed stables, as well as some later additions from the nineteenth and twentieth centuries.

We urge everyone to attend the Planning Committee meeting on 23rd July 2013.

The more the better! This is not only the future of Wandsworth Town but the decision will have impacts on all future plans including very tall building in Wandsworth, including at the heart of Clapham Junction. YOU should be there to witness the Councillors decision and make them accountable of their decision (remember that there is a local election next year!).

The full report published yesterday (with a recommendation to approve) made by the planning officer is HERE.

First of all, although very detailed on some parts (full details of access, appearance, layout and scale), the officer’s report confirmed that this is an outline application. In other words it means that some elements are reserved for future approval.

As of today, there are 259 representations on the Council’s website:

However the planning officer wrote in his report 153 objections and 25 supports. Obviously all of that was prepared a long time ago and he did not bother looking at the last records. In other words, don’t bother sending your comments, the Council could not care less!

Along with many residents writing letters of objections, the following groups have also disapproved the scheme:

Waitrose (Southside) said that the applicant has not undertaken a Retail Assessment which is against the NPPF sequential and impact tests.

The Design Review Panel, although impressed by the proposal,  remains concerned with the integration of the scheme within the town centre.

Port of London Authority has no objections.

Forget about social and even affordable housing

661 units (with 66 of them – 10%, all in the same block 9 – being affordable, i.e. shared ownership). There is no social housing at all. And bear in mind that all affordable units are located in the same block which is located… just beside the gasholder, and therefore will not be built before the decommissioning of the gas structure (and nobody knows when)!

The estimated Community Infrastructure Levy paid to Wandsworth Council by the developers is: £16,520,019 (another £3.6 million is paid to the Mayor of London). This includes the nearly £2m that the developers have to pay in order to avoid building social housing (in other words, the less social housing, the more money for the Council).

The Director of Housing is really confused about the plan (read at the end of page 32 and p 33: “It is disconcerting… Not clear… we would wish… I would like…They should confirm… Concern about layout, amenity and lack of private amenity space for the units…“). Obviously he received orders to shut up! He later received further details ( £1.2m offered to avoid social housing), although officers have not been able to assess the design and layout of the affordable units.

On the call-in scheme, the Secretary of State considered that the amount of affordable housing provision at 11% was unacceptably low and in conflict with the development plan, including the Core Strategy, and with national policy. The argument of the developers? The site is not viable otherwise, and anyway, we give you £2m!

>> Read also: Parliament debate about properties being bought by foreigners

Wide-angle images: when the government inspector says no, the planning officer reads yes!

“The Inspector considered this issue at the Call In Public Inquiry and found the use of the wider angle shots justified to show the totality of the development in its context, notwithstanding the consequent distortion in the image which inevitably leads to elements in a shot appearing further away or smaller than they would in reality. He reasoned that the images should be judged on site, so that the viewer can make the relevant adjustment and gain a more accurate impression of the scale of the proposals in the scene.“

THAT IS JUST ASTONISHING!!!

“1.9.I consider it vital, in this particular scheme, that sufficient of the sites’ context is shown in the AVRs so I consider that the use of a wider angle is justified.“

However he immediately added:

“Nonetheless I note that, where the new buildings take up the whole of the view, for example in views 16, 27, 36 and 50, the representation is likely to be distorted outside the central 40º sector. Another difficulty is that the use of a wide angle lens has the effect of distorting perspective and distance, and thus the spatial relationship between foreground and background.“

And in the next paragraph he even highlights in bold:

This is exactly how it is said (and in bold even, nobody can miss it): “the applicant’s AVRs cannot be taken as accurately representing what would be seen by the human eye” (don’t trust me, go and see with your own eyes, page 7 of the report). It is very clear. I am bemused how the planning officer is implying that the inspector has endorsed the use of wide-angle pictures! SHAME ON YOU, officer!

And later (page 58) it still wrote that: “it reflects what the human eye would see” despite all evidence that this is plain false.

As for the Peabody proposal where we demonstrated that changing the town centre boundaries allowed them to include taller buildings, the report says:

“This site is now within the town centre boundary, whereas when the previous scheme was considered it was just outside the town centre and was considered to be an edge of centre location. Paragraph 23 of the NPPF supports town centre growth and states that local planning authorities should recognise the important role of residential development in ensuring the vitality of town centres. Core Strategy Policy PL8 identifies the regeneration objectives for the wider Wandsworth area including this site, where high density mixed use redevelopment is sought.”

Why should they have to be imaginative when the same trick works again?

Although the officer tried to disguise the number of failure and the breach of policy on tall buildings, it is still apparent from the report that the scheme does not follow the 15 criteria needed to satisfy policy DMS4. CJAG point of view is that it fails on nearly all of the criteria. But actually, reading carefully the assessment made in the report you will see:

crit. 3- there will be some climatic effects arising from the tall buildings in terms of impact on sun/daylight;

4- there will be harm to the settings of some listed buildings […] the site sits at the heart of the Wandsworth Town Conservation Area and its character and appearance will be affected;

5- there will be some harm to the setting of important listed buildings and the Wandsworth Town Conservation Area;

However all those criteria are labelled as “ok” by the officer, using reasons such as: “whilst there is harm, the scheme would no be viable with out…“,  “it is considered that any harm would be offset by the noticeable heritage” or “this, together with the other new buildings are attractive and well designed and will set a new standard for tall buildings” and “the benefits to the townscape are significant and will outweigh any harm caused“. And as the planning officer said that the tower will. have less impact on the setting of some listed buildings, there is not a word on the fact that actually the tower is even closer to several major Grades II* Listed Buildings (only 50m from the stable blocks and closer to Wandsworth Plain and All Saints’ Church) than in the previous scheme that was rejected.

[download our comparison CJAG/planning officer response to the criteria]

Again, a misleading statement from the officer. English Heritage never wrote the word “substantial” in their letter dated 3rd July 2013. They specifically said:

“[We] still consider that the amended proposals will have an adverse impact on their significance. As noted by NPPF paragraph 132, the more important the asset the greater the weight that should be given to their conservation – and these are Grade II* listed buildings; amongst the most significant secular properties in Wandsworth.“

SHAME ON YOU, officer!

This report is completely inconsistent, misleading with statements including gross mistakes. It has obviously been rushed through by the Council eager to get an rubber stamp for approval before the holidays!

The same officer who made a recommendation to approved the previous scheme back in 2008, with two skyscrapers, is obviously keen (as well as the Council when all the Conservative councillors approved the proposal 5 years ago) to recommend this new one for approval. As we expected, they say in their conclusion (page 82):

“Council officers are of the view that this development strikes the appropriate balance that takes account of the risks from the gasholder and the need to provide a comprehensive and viable development for this site.“

It is just a disgrace to see once again how planning procedure are considered by Wandsworth Council!

Last but not least, to finish with a bit of fun, we have put in tag-clouds (most frequent words are ordered by size and presented an image) for: 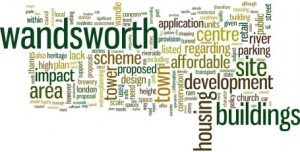 Tagcloud for objections = the most frequent words 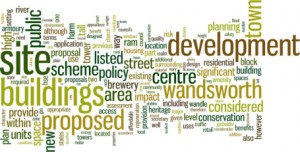 Tagcloud for officer’s report = the most frequent words