As we demonstrated in 2012, it seems that developers are still providing wide angle images of their proposals despite the current policy.

“Detailed visual assessments submitted with applications in order to demonstrate compliance with this policy will be required to accurately represent what would be seen by the human eye. The use of wide-angle lenses, for example, can distort perspective and distance, and thus the relationship between the foreground and background, and this will not be acceptable”.

Two years ago, following the Ram Brewery inquiry, the government inspector rejected the plan and wrote in his report (p7):

“Guidance on how to prepare AVRs consistently indicates that images should ideally be made within a 40° field of view (FOV); beyond that, the perceived shapes of surrounding buildings may be distorted […]  the use of a wide angle lens has the effect of distorting perspective and distance, and thus the spatial relationship between foreground and background. Existing buildings, and therefore the new ones, appear further away or smaller than they are or would be in reality, This was particularly apparent to me when I compared the AVRs to the actual views from the same viewpoints and is also demonstrated in the Wandsworth Society’s comparable 40º AVRs.

[…] the applicant’s AVRs cannot be taken as accurately representing what would be seen by the human eye.“

What is a wide angle photograph?

In photography, a wide-angle lens refers to a lens whose focal length is substantially smaller than the focal length of a normal lens for a given film plane. This type of lens allows more of the scene to be included in the photograph, where the photographer may not be able to move farther from the scene to photograph it. Another use is where the photographer wishes to emphasise the difference in size or distance between objects in the foreground and the background; nearby objects appear very large and objects at a moderate distance appear small and far away. 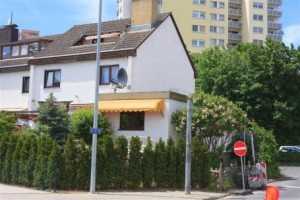 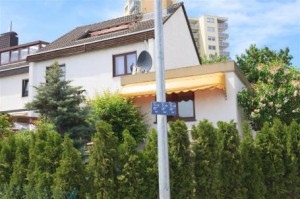 Photo taken with a 34 mm lens (wide-angle). The tower disappears nearly completely behind the house. The camera was moved closer in the second picture in order to keep the same dimensions for the foreground (the house); it’s the only way to compare properly the impact foreground vs background.

In the case of Peabody’s proposal, lenses used were 24mm or 35mm. For the current Ram Brewery scheme, they have also used lenses of 24mm and 35mm as stated in their Accurate Visual Representation methodology. They are definitely wide-angle lenses.

So then I tried to understand how representations using a wide-angle camera could be seen as accurate to what would see a human eye.

As I quoted the policy DMPD (above), I was told by officers that the exact words used were: “The use of wide-angle lenses, for example, can distort perspective and distance […] and this will not be acceptable”. Therefore, when it does not, this is acceptable. As I was told “there are times when images using a wide angle camera reflect what will be seen by human eye“.

So then I asked a photographer with more than 10 years experience: “When does it not distort perspective and distance?” The answer is:

“When you only take a photo of a plane surface, for example a wall or a sheet of paper. In all other cases when you have a foreground and background. it does distort perspective“.

As demonstrated, wide-angle images are not close to what the naked eye would see when the development is complete. Rather the opposite as you can see above. Their purpose is to give other information, such as number of buildings, location…etc. This is explained by Miller Hare, a company specialised in those images, saying: “it is logical to use a wide angle lens in order to include additional context in the print“.

It seems therefore that the Wandsworth planning officers dispute the fact that using a wide angle camera to illustrate buildings in a proposed scheme will always impact perspective and distance and that buildings, and therefore the new ones, appear further away or smaller than they are or would be in reality. Tim Cronin said: “the images used are the closest representation to what the naked human eye would see once the development is complete“.

Images shown to the public do not need to be correct

I pointed out the fact that images available on the Council website (for the public to consult) were not acceptable representations. I was told that the process is to put on the website all documents sent by the developers, whether they are acceptable or not and therefore it does not imply that it was validated by Wandsworth planning department. CJAG received a letter from Tim Cronin, planning officer, saying that: “This does not mean the plans or supporting documents are accurate at this stage, just that they have submitted the information required“.

This is the public to guess probably…

In addition, in order to distribute the information as soon as possible whenever a major scheme is due to consultation, the Planning News leaflets distributed to the public by the Council may not include accurate images, but are considered better than drawings and, as Tim Cronin said, “serve the purpose at that stage adequately“.

In order to summarize: