There has been various interesting discussions recently in the newspaper about the impact of tall building (very very tall buildings I mean!) on London skyline.

In early March, Rowan Moore, the Observer’s architecture critic, organised a panel discussion about the pros and cons of London’s increasing number of tall buildings.

Despite the recession, London is in the grip of a tall building frenzy. Driven by foreign money, ego and the pressure to build homes and offices, towers are being approved and constructed at a staggering rate. London Bridge is already home to Europe’s tallest and soon the South Bank and Vauxhall will be rivaling the City as serious high rise hubs.

Is our planning system working? [A question that many are currently wondering in Wandsworth!] Are tall buildings blighting London’s skyline? According to the Guardian’s article, most of the audience didn’t think so at the beginning; more did by the end. 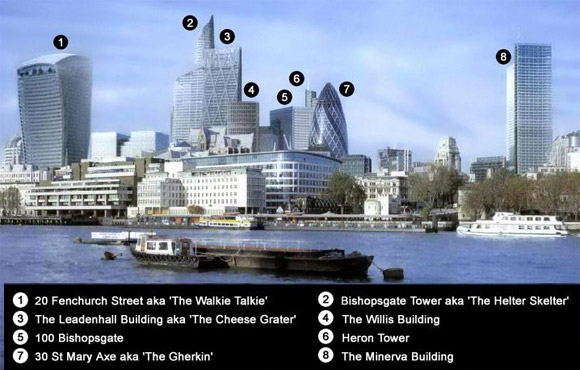 A handy graphic showing how London’s skyline is changing

The Journalist wrote (words in bold are my own highlight):

“No one had a good word for the towers now planned and in some cases rising on the south bank of the Thames, mostly containing flats sold to overseas speculators, many of which will no doubt remain empty.

For me the architectural point is that tall buildings are more visible than others and therefore should reach higher standards of design, which is not happening. There is also a political point, as the current spate of tower proposals represents the triumph of financial speculation over most environmental considerations. Is this really what we want?“

The Walkie Talkie building view from St Katherine’s docks, and it’s impact on Ten Trinity Square (a building dated 1922 which played host to the inaugural meeting of the General Assembly of the United Nations in 1946). The Walkie-Talkie tower has upset Unesco and been called ‘brutally dominant’ by English Heritage

I read an article about the Walkie Talkie from Rafael Viñoly. It says:

“Viñoly is indifferent to the criticism, though, seeming to enjoy the controversy his project has created. […] He is untroubled by the extent of Rees’s [note: chief planner of London, who has presided over its bold, vertical evolution since 1985] powers: “You can say it’s a form of absolutism, but at least you have someone to blame, for the good and the bad. If Louis XIV hadn’t been the king, then Paris wouldn’t have happened – right?””

I really hope that Mr Viñoly has not the same knowledge in history as he’s got in architecture. Paris was not built by Louis XIV (rather the opposite, he decided to avoid that city and set up in Versailles) and part of Paris architecture has been transformed in the 19th century by Baron Haussmann under Napoleon III.

“The view from the Tower is already ruined – would it be logical to demolish all of the visible modern buildings?”

When things are bad, there is no need to seek to improve them.

A view that is shared by Wandsworth planning as the Assistant Director for Planning said last autumn (regarding 102-104 High Street, p.a. 2012/3666) that the existing building sets a precedent for height and bulk, which seems to imply that an application for a new building is acceptable if it is no worse than that presently there.

Coming soon also the “Cheesegrater” (Leadenhall building) although the current video does not show that it will be half blighted by the then fully erected Walkie Talkie!

See also a series of photos from the Daily Mail showing how the skyline of London has changed within the last 2 years.