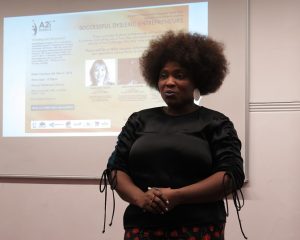 Aspire2inspire Dyslexia – the community interest dyslexic support organisation created by Elizabeth Kwarteng-Amaning with only £1.25 a few years ago is powering along. On Tuesday, as part of Wandsworth Enterprise Week, it hosted a trio of dyslexic entrepreneurs who showed how they had built businesses and careers, despite being thought failures at school.

All three felt that their “learning differently” approach allowed them to excel in areas that require creativity and “thinking outside the box.”

Charlotte Childs, who runs a marketing and design consultancy said, “I got thrown out of school. I think in pictures and patterns, so writing is very difficult for me.” She set up her own company after she got tired of the linear thinking of conventional businesses. When she was diagnosed in her thirties, her struggles made sense.

There is research that supports the idea that dyslexics can channel their frustrations, obstacles and original modes of thinking and problem solving into careers where these are recognised and rewarded. Obviously more dyslexics become creative professionals, artists, designers and film-makers, rather than lawyers: rule- and word-bound structures do not appeal to them. 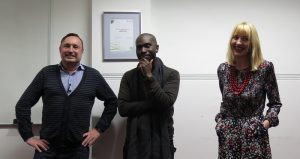 Leslie Lewis Walker is a video-maker and musician. He did an interactive presentation, where he gave out Post-its with a couple of words on, and riffed off that for his talk. He initially got a job in the Home Office, where he could use his people skills to sort out emergency visas, which involved schmoozing Consular personnel, which he excelled at. He was promoted due to his fine performance, and found himself in a job where meetings and minute-taking were required, and he wasn’t able to deliver the right material. He got frustrated and “bungee-jumped” into film-making for businesses because he can deliver “thinking outside the box” to communicate ideas effectively.

Business development coach Dale Smith said, “We have been blessed by thinking differently.” As a schoolchild, he was sent to the “Special Needs” class. Fortunately the inspiring teacher did not see him and the other pupils as “stupid” but people who needed nurturing to find their strengths. After succeeding in various conventional jobs, Dale got frustrated with where he was, and started his own business Bridge Consulting, “To help people embrace the best version of themselves.”

Elizabeth Kwarteng-Amaning said, “The Successful Dyslexic Entrepreneurs event 2018 was a life-changing experience for our attendees. A2i Dyslexia can help the individuals to unlock their full potential by setting up their own enterprise.”

The event was rounded off with a networking session and some lovely food.